The world’s first heavy metal band, Black Sabbath, took their name from Mario Bava’s classic 1963 horror film. In the years since, horror and metal have continued to have an ongoing conversation, from horror-themed metal bands (such as Cradle of Filth, The Great Old Ones, or Carach Angren) to metal-themed horror films.

My short story Requiem in Frost continues this tradition, telling the story of a Norwegian girl who moves into a house haunted by the ghost of a black metal musician.

To coincide with its release, I’ve decided to make a list of movies that, to me, feel “metal.” However, I’m not going to limit this list to horror, and I’m going to avoid films that are specifically about metal. This is because every other list of “Most Metal films of all time” take it literally, all of them focusing exclusively on the same 10 or so movies to have explicit references to the genre. The internet can only withstand so many posts containing Deathgasm, The Gate, The Devil’s Candy, and Lords of Chaos. So instead, I’m going to focus on movies that feel like they capture the essence of metal.

Here’s my criteria: do the images in the movie feel like they could be metal album covers? Could you put metal on the soundtrack and have it feel right? Does the story feel like it could also be that of a metal concept album? Does it feel powerful and meticulously constructed in the way that good metal does?

Obviously, everyone will have their own view on what does and doesn’t belong on this list. These are my choices, and I’m sure that your own are perfectly valid. That’s why these are 25 of the most metal films that aren’t about metal—not the 25 most. 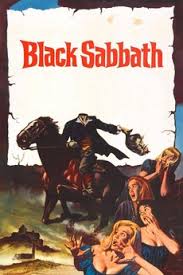 Here we go. Organized by year:

Jonathan Fortin is the author of Lilitu: The Memoirs of a Succubus (coming December 2019 from Crystal Lake Publishing) and Nightmarescape (Mocha Memoirs Press). An unashamed lover of spooky Gothic stories, Jonathan was named the “Next Great Horror Writer” in 2017 by HorrorAddicts.net. He attended the Clarion Writing Program in 2012, one year after graduating summa cum laude from San Francisco State University’s Creative Writing program. When not writing, Jonathan enjoys voice acting, dressing like a Victorian gentleman, and indulging in all things odd and macabre in the San Francisco Bay Area. You can follow him online at www.jonathanfortin.com or on Twitter @Jonathan_Fortin.

Looking for something to do with yourself after surviving the horrors of unending holiday dinners, hyperactive family drama, and the fruitcake that will not die?  Take in these classic horror hits and worthy recent scarefests. 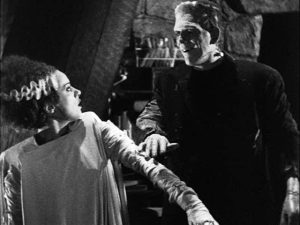 Antichrist – Director Lars von Trier’s 2009 disturbing and controversial family horror drama opens with a bizarre and unique sex scene/baby death montage and gets weirder from there.  Only Willem Dafoe (Platoon) can make dead babies seem so casual- and I say that in a good way!  Although von Trier’s distorted cutting, angled filming, and scribbled chapter plates may be jarring to some, these visual cues akin perfectly to the unreliable feelings of distortion and downward spiral that such grievous loss can bring.  Cannes Best Actress winner Charlotte Gainesburg (I’m Not There) is a little annoying as well, but then again obviously understandable as a mother who was shebanging when she should have been looking after her child.  The altered perception of time, responsibility, and indifference bounces between the leads nicely as we progress towards plenty of violent sex, mental scares, and kinky creepy.  It’s all a little uppity considering the dirty subject matter, and certain audiences will definitely be alienated by the material-but the performances here win against the saucier distrubia. Put the kids to bed for this one.

Bride of Frankenstein – Despite its short length, over the top style, and bad science effects, this 1935 Universal sequel is a classic for a reason.  Boris Karloff (The Mummy) returns with Elsa Lanchester (Witness for the Prosecution) for director James Whale’s (The Invisible Man, Showboat) stylized tale in the spirit of Mary Shelley’s infamous creation.  The theatrics at hand add to the spooky atmosphere and morally ambiguous, hair raising drama and provide plenty of scary hijinks for both young and old.  Even the score is wonderful as well, being tragic when needed and even spiritual and bittersweet. Love, tragedy, death, angry mobs, misunderstood monsters- there’s something for everyone here!  Long time classic horror fans can always enjoy the great, campy classic quotes and old school iconography.  Educate the family while taking in all the subtext, layers, and quality storytelling here.

Child’s Play – If you want to scare the kids out of wanting THE toy of this holiday season, then this is the film! Though dated, some of the 1988 scares may indeed be too much for the super youngins.  However, nostalgic folks can chuckle with Chucky’s naughty wit courtesy of Brad Dourif (Lord of the Rings, Dune) and enjoy the more intelligent mystery and suspense aspects here.  While the sequels certainly have their ups and downs, Chris Sarandon (Fright Night, Dog Day Afternoon), and Catherine Hicks (7th Heaven) have some fine moments here.  Die hard marathoners can continue with Jenny Agutter (Logan’s Run) in Child’s Play 2 or go really crazy with Jennifer Tilly’s (Bound) send up in Bride of Chucky and Seed of Chucky.  Child’s Play 3 isn’t that bad, but Chucky run amok on a military base is a bit much, even for this zany franchise.

Trick ‘r Treat – This 2007 pseudo horror anthology is kind of comical- a diminutive pumpkin boy Sam (short for Samhain) pursues naughty Halloween rule breakers? Some segments here are pretty bad, even stupid and just preposterous beyond belief.  Somehow, however, writer and director Michael Dougherty’s (X2, Superman Returns) quirky style and lighthearted irony keep these tales- among them twisted school principal Dylan Baker (Kings, Thirteen Days) and seemingly innocent and Red Riding Hood-esque Anna Paquin (True Blood, X-Men) – on the bemusing side.  The ridiculousness is actually quite refreshing; especially against other recent horror pictures that try to be sardonic and miss or those copycat sequels and remakes that just take themselves too dang seriously. 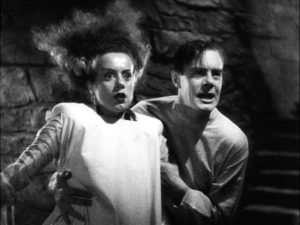 The Watcher in the Woods – Although this 1980 Disney thriller might be a little too scary for the super young Santa set, older kids and the young at heart who grew up on this spooky charmer can delight all over again in young Lynn Holly Johnson (Ice Castles, For Your Eyes Only) and crotchety Bettie Davis (What Ever Happened to Baby Jane? Hush, Hush Sweet Charlotte) as they try to solve the haunting events and disappearances in the forest about their grand English manor.  Yes, it’s a little marred by Disney’s influence and maybe some of the events here are a fairly typical now. However, some scenes are still as scary now as they were to me back then.  When my mother wanted to frighten me indoors from the woods surrounding our own home or prevent me from staying up to watch an eclipse, she’d yell, “Do you want to end up like Karen in The Watcher in the Woods?!”

Hope all of you Addicts are surviving the holiday season.

Some of the staff here at HorrorAddicts.net have given us suggestions for horror holiday reading/listening!

Dan-  One of my favorite Christmas horror stories is from my man Jack Mangan, which made it’s way to Horror Addicts #52, called “Santa Thing”. What a great, creepy, and exciting twist! Click below to listen.

David- I liked Michele Roger’s Santa Claws which was on HorrorAddicts.net #13 and has recently been printed in a new anthology called Ain’t No Sanity Clause. You can buy it now on Kindle.

Emz- My favorite holiday horror story- and most won’t think this is horror – is a story I read when I was little called Christmas Every Day by William Dean Howells. A little kid wants Christmas every day… but it all goes horribly wrong as presents keep showing up and are so many in number they block the door to the house and cause all sorts of problems! It was written in 1892 and can be read here at project gutenberg http://www.gutenberg.org/ebooks/22519

Looking for more holiday horror? How about listening to the Wicked Women Writers Challenge show again? “The Secret Ingredient” by Rebecca Snow is a tale that will give you chills, even if you aren’t out shoveling snow.

Do you have a favorite Christmas horror tale? Please share in the comments. 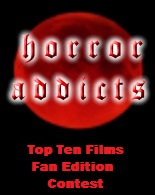 The votes are in and they have been counted. So without further delay here is the TOP TEN MOVIES as voted by you the listeners.

Now on to the winner of the prize package which includes copies of some featured films from this season, and a copy of the book, “Vikings, Vampires and Mailmen”.

The winner is (Insert your own drum roll here);

Congratulations to Bill and thank you to all that entered the contest.

Below are the movies Bill submitted to the contest in the list he had them in order.