two wee miracles in a house on a hill under the southern sun. Together with Lee Murray, he co-writes the Path of Ra crime-noir thriller series from Raw Dog Screaming Press (Hounds of the Underworld, Teeth of the Wolf, Blood of the Sun) and co-edited the flash-fiction horror anthology Baby Teeth – Bite-sized Tales of Terror, and At The Edge, an anthology of Antipodean dark fiction.

His steampunk-grimdark-comic fantasy series Children of Bane starts with Brothers of the Knife and continues in Sons of the Curse and Sisters of Spindrift (Omnium Gatherum Media). Dan’s science fiction, dark fantasy and horror short stories have been published in numerous venues worldwide. He also regularly narrates and produces podcasts and audiobooks.

NTK: How did you become involved with horror and how old were you?

DR: Aside from strange nightmares being some of my first actual memories? My first taste of horror was the Fighting Fantasy gamebook, City of Thieves by Ian Livingstone and Steve Jackson, back when I was about 10, but the book that really bit hard and held on was Stephen King’s IT, which I read at the tender age of 14, and never looked back. Then in my teens, I read a LOT of Hugh Cook, a kiwi author who blended SF with fantasy and horror like he was just mixing up cheese and chilli omelettes and frying them in the skulls of his enemies, and after that I found anything that didn’t have at least a hint of darkness about it just didn’t appeal. When I started writing for reals, it didn’t seem to matter if I was trying to write SF or fantasy or even something vaguely literary, the horror just crept on in and made itself at home among the words.

NTK: What is your favorite horror movie?

DR: Ridley Scott’s Alien, although Event Horizon is a very close runner-up. Followed by Shaun of the Dead. But from a purist horror perspective, I’m going to say that actually, I really like The Ring.

NTK: What is your favorite horror television show?

NTK: What is your favorite horror novel?

DR: Phil Rossi’s Crescent is a stunning deep space horror debut, even more so if you listen to it in his own sultry voice from when he released it as a podcast novel. Another excellent book which I first discovered in audio, but is now only around in ebook is Jack Kincaid’s Hoad’s Grim. And right now I’m really enjoying Gemma Files’ Hexslinger series.

NTK: What inspires your writing?

DR: I find that inspiration is a sort of building-block exercise, with small ideas clattering around in the corners of the old think-box until enough of them collide together to create some resonance, their own light. Often when I start to write, if I’m just free-writing without a particular theme in mind, one of these mash-ups will drive an urge to figure out what’s in the middle of that light, by breaking it down in words. So in short, I find inspiration by soaking up lots of random stuff all the time and surprise myself by seeing what comes out on the page at the end of the day. Oh, and simmering rage at the vile injustices of the world and my role as an artist to balance those scales with words.

NTK: As a person of color, how has your experience been in the horror community? What improvements could be made?

DR: Ever since I started to find my voice as a Māori writer, I have had far more feedback to the tune of please do more of this, than anything negative. In Aotearoa New Zealand, we’re on the long hard road towards reconciling the damages wrought by colonialism, and overcoming decades of ingrained racism and inequality is a huge challenge. But we’re getting there, slowly. Māori voices in literature tend to focus on the literary, both historic and contemporary, so bringing my perspective to the speculative genres has offered readers a fresh look at not only the sort of stories we in Aotearoa can tell, but it has also allowed me to explore some of these social issues through the lens that the speculative offers. Someone famous once said something along the lines of “Those of us who have the ability to express ourselves, have a duty to do so, on behalf of those who have not”. Writing Matiu in the Path of Ra, who exists not only along the fringes of race and the law but also the fine line between this world and the next, between sanity and madness, allowed me a fantastic opportunity to really delve into what that phrase means to me, and to exercise my need to speak out, and give voice to those who cannot.

NTK: Do your characters have free will? Or do you decide their every move?

DR: I usually find out what my characters have done the day after I write it. You know, I tell Lee that I’m working towards the plan, but really it’s the characters who take charge and tell the story. I can’t be held responsible for all those unexpected explosions and body parts that litter the pages. It’s all them.

It is my duty to make sure that while we’re following all the rules of telling the story we planned to tell, we’re making sure that if the story wants to take itself off at a tangent for the benefit of the story, that I enable that to take place. The story has a right to be heard. It’s a highly dynamic process.

NTK: Lee said, “Dan writes that bad-ass character, Matiu Yee, so well, I have to wonder what he got up to when he was younger…”

DR: Well, to answer your question Lee, I used to do my fair share of walking the streets at night, looking all gloomy, but that was mainly because I didn’t have a car, which was sad. Not because I was secretly an enforcer for a seedy dog-fighting ring in the backblocks of the Hutt Valley AT ALL. I even have witnesses who’ll back me up on that. Dependable, reliable people, who you don’t want to mess with. As you can tell, part of my role in this partnership is often to deliver the comic relief and smile darkly for the camera.

NTK: (Laughs.) What’s your best piece of advice for the new writer?

DR: Finish what you start, have faith in what you create, and follow through by getting feedback, revising your work, and submitting. You won’t know if you can sell a story until you dive in and start selling stories.

NTK: What does the future hold for you? What works do Horror Addicts have to look forward to?

DR: My main focus right now is Children of Bane, a grimdark/steampunk/comedy fantasy series about unlikely hero Akmenos, an imperial cook accused of political assassination most foul, who has to save the world armed with little more than good intentions, salt and pepper, and an armload of food-related puns. I’m currently working on the final chapters of Book Four in the series, titled Daughters of Dust, but anyone who’s keen to try something dark yet wildly absurd can take a bite out of Brothers of the Knife, where it all begins (the first couple of chapters are up to read over at my website). 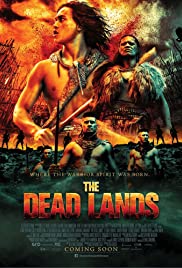 When warriors from a rival tribe commit sacrilege in his tribe’s burial ground, Hongi (James Rolleston), son of a Maori Chieftain reports the act to his father. When questioned about the act, the rival crew of hot heads declares war on the village, killing all but Hongi who has been knocked down a ravine and forgotten.

Coming to and finding himself the only survivor he pursues the killers into a forbidden area (the Deadlands). There he meets an invincible ghost warrior who is rumored to haunt the land.

Hongi discovers that the ghost is in fact, a fierce warrior, (Lawrence Makoare) although throughout the film there are times you wonder if the frightening warrior is truly a ghost or still human. Either way, he is tormented by a ghastly memory of loss in his own life which gives him a thorough understanding of the young boy whom he teaches to fight, and they join forces to hunt down and destroy the rival killers.

If you are a fan of action films, you will appreciate that The Dead Lands, in fact, follows the action film formula. There is plenty of bone-cracking, slashing, and gore to keep you interested.

If you are bothered by horrific characters who battle in close and bloody conflict, taunting their opponents with insane faces, wagging tongues, stomping, screeching  and other acts designed to instill fear in the opponent, then I’d advise skipping this one. It is one of those movies where you want to reach out and smack the evil characters just for being so overwhelmingly nasty!

As for telling the story of loss, revenge, and horror lying in the psyche of both main characters, this movie is a winner.

The writers and director use a mix of tradition, mythology, and visions of dead ancestors to produce a truly spiritual “other-world” ending which will make you question what you’ve seen.

Thumbs up on horror and realism!