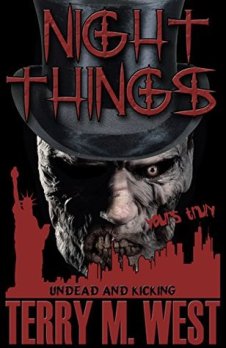 What would our world be like if vampires, werewolves, zombies, ghouls, mermen and other creature walked the earth? They aren’t all trying to hurt humans, some of them just want to make an honest living and be accepted. People still fear what they don’t understand and even though some accept the Night Things, others aren’t so trusting. So the night things are given devices that track their every move.

Times are changing after the events of Z Day and Johnny Stucke, a Night thing himself is getting involved in politics. One of his first orders of business was getting Dr. Herbert West to work on a way to control zombies. Enter recently deceased professional MMA fighter Carol Haddon. Her DNA may hold the secret to changing the world’s zombies. Carol has also drawn the attention of Herbert West’s greatest enemy Jack The Ripper. Due to an accident Dr. West has made Jack more powerful than ever and if Dr. West can’t defeat him, it could bring on the apocalypse.

Night Things: Undead And Kicking by Terry M. West  is the second book in The Magic Now series and there is so much going on here that a 2 paragraph description hardly does it justice. The plot moves along at a brisk pace, it includes several sub plots and some great characters. There are also some great cameos from popular creatures and people known to classic horror fans. What makes this masterpiece of horror stand out over other works in the genre is how Terry M. West presents his characters.

For instance the main character is Carol Haddon. When she is introduced we see her as someone who feels compassion for the Night Things, she works in a shelter for them and we hear her comparing them to immigrants(love the metaphor). We also see her as a bad ass MMA fighter, but at the same time she is a vulnerable human being who goes to a therapist to deal with feelings she has for her mother. At this point Carol comes across as a complex person and things get harder for her as we find out that the two people helping her, Johnny Stucke and Herbert West have their own agenda and might not have her best interest at heart. That being said they are better than Jack The Ripper who would like nothing better than to rip the dna from her bone marrow. Carol is a hero you can relate to because she’s a compassionate person in a bad situation. Then we have Johhny Stuck and Herbert West who are shades of grey. They want to help Carol but at the same time they have an agenda that has already made major problems for Carol. You see the good and bad in both and it makes you like them that much more.

Undead And Kicking is the type of book that you can point to when people ask you why you like horror. Terry M. West is a horror fan writing books that he knows other horror fans will love. This story puts a fresh spin on classic horror mythology and also manages to add humor, great characters and plenty of blood and good scares to the mix.  I can’t say enough good things about this book and I hope there are several more books in The Magic Now series.