For most people when you mention a family business, you might think of a furniture store or a car dealership where several generations of family members work. The Grudge family on the other hand are a little different; they hunt monsters. Their job is to protect regular people from the creatures that haunt their worst nightmares. Vampires and werewolves are only the tip of the iceberg. All of the creatures that people think are made up, are real and they have a taste for human flesh. Luckily for us, there are a few good men and women out there whose job it is to put an end to the things that go bump in the night.

This is the story behind Michael Boatman’s The Revenant Road. Michael Boatman is probably best known for his work as an actor. Some of his roles include Julius Cain in The Good Wife, Carter Heywood in Spin City and Stanley Babson in Arliss. Michael has been acting since 1987 and in his spare time he writes horror. Michael has had short stories published in Dark Delicacies 3 and in the magazine Weird Tales. Some of  his other novels include The Red Wake, Her Daughter In Darkness and he also has a short story collection called:  God Laughs When You Die.

The Revenant Road begins with a man and a woman being torn apart by a nine foot creature covered in hair with teeth like a shark. The woman’s name was Jeanie. After her death her story lives on, because she haunts Obidiah Grudge. Obidiah is an author who writes dark, twisted stories about death and anything else that gives people nightmares. He hears voices and sees things that inspire his writing, but he doesn’t fully understand his own powers.

Obidiah is on the road promoting his latest book when he gets a call from his mother Lenore telling him that his mostly absent father Marcus has just died. Obidiah goes to the funeral and meets friends of his father that he has never seen before, including Marcus’s partner of 30 years, Neville Kowalski. Obidiah then learns the truth about why his father was gone for most of his life. Marcus was a sixth generation monster hunter and its up to Obidiah to take over the family business.

As if his life wasn’t bad enough with his critics trying to kill him, now he has to worry about monsters trying to destroy him also. Kowalski shows Obidiah the monster hunter’s headquarters called Kalakuta. Inside Kalakuta Obidiah learns that monster hunters are called Bents and they have special abilities to help them hunt. In Obidiah’s case he can talk to the recently deceased and any weapon he shoots becomes more powerful in his hands. Bents are given their assignments and weapons by the Nolane who protects earth from a parallel dimension called The Wraithing. The Wraithing is where the spirits that give people nightmares live and they’re  trying to cross over to our world.

The Revenant Road is an action packed thrill ride filled with comedy, gore and over the top characters. One of my favorite parts of the book is when Obidiah is in Kalakuta learning about the life of monster hunters and sees first hand the Nolane stopping an evil spirit from escaping The Wraithing. This book does a great job setting up a mythology of monster hunters and showing how monsters such as vampires and werewolves fit into it. My favorite part was  when a popular talk show host invites Obidiah to her home to discuss his latest book and we find out that she is not human. There was also a battle scene with a minotaur that was really good. There was a lot of humor in the book as well such as when Obidiah gives a speech on why he hates bread and the interaction between Kowalski and Obidiah before the final battle is very funny.

I did have some problems with the book though,  there we’re a couple of items that we’re not explained right away such as the reason why book critics are trying to kill Obidiah and no reason is given behind why an action figure is talking to Obidiah in the beginning. The author does explain who is behind the action figure talking but not how its happening. Also there are quite a few characters introduced towards the end that I would have liked  more background information on including Neville Kowalski. (I’ve heard if you buy the paperback of The Revenant Road, there is a short story explaining Kowalski’s orgin more, but unfortunatley I read the e-book.)

There are some  unanswered questions at the end of this book along with  some new questions that get raised about the main characters after the final battle. So my guess is that The Revenant Road is going to be just the first book in a series of adventures based on Obidiah Grudge (which I think is a perfect name for a monster hunter) and Neville Kowalski.  I can think of quite a few good stories that can be told within the universe that Michael Boatman has created and I’m looking forward to the next book in the series. 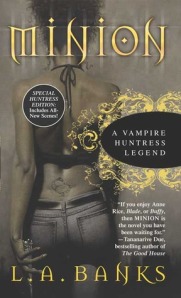 With February being Black History Month I thought it would be nice to do a blog post talking about African American horror writers. I knew of four writers when I started this post but managed to find  more as I was writing. I’m sure there are quite a few more out there that I missed, so if you know of any others please leave a  comment on the end of this post.

The first author I want to talk about and probably the most popular is L.A. Banks. L.A. Banks was born in Philadelphia. She has written under several different names, has written in multiple genres and has won many literary awards. L.A. Banks is the author of the Vampire Huntress series of novels and comics. There are 12 novels in this series along with one graphic novel and a YA novel. Some critics have called her work: “fresh, hip, fantastic and far superior to Buffy.” Some of her vampire novels include Minion and The Awakening.

L.A. Banks has also written a series of six werewolf novels called the Crimson Moon series. Some of the titles include Never Cry Werewolf and Left for Undead. L.A. Banks was also the co founder of The Liar’s Club, a networking group for professionals in publishing and other aspects of entertainment. Sadly L.A. Banks died of adrenal cancer in 2011. You can find out more about her career at leslieesdailebanks.com.

Next up is Maurice Broaddus, he was born in London, England but now lives in America. He graduated from Purdue

University and is a senior writer for Hollywoodjesus.com. Maurice has written in several genres, his horror novels include: Devil’s Marionette and The Knights of Breton Court: King Maker. Maurice now live in Indianapolis Indiana and is part of the Indiana Horror Writers Association. You can learn more about him at mauricebroaddus.com.

The next author I want to talk about is Brandon Massey, he was born in Waukegan, Illinois in 1973 and has published three novels a year since  1999. Brandon loved watching horror movies growing up and he was a life long reader. He then decided that he wanted to start telling his own stories and became a horror writer. Some of his novels include: Thunderland and Covenant. Brandon has also edited two collections of short stories by African American Horror writers called: Dark Dreams and Voices From The Other Side: Dark Dreams 2. To learn more about Brandon Massey go to: brandonmassey.com.

Next on the list is Wrath James White. Wrath is a former MMA fighter and hard core horror author.  In 2011 Wrath wrote a book of dark poetry called Vicious Romantic which was nominated for an HWA Bram Stoker award and a movie just went into production based on his novel The Resurrectionist.  some of his other works include Succulent Prey and Population Zero. Wrath James White also has a great blog which I’ve been reading for the last 5 years where he talks about politics, religion and anything else that he finds worthy to talk about, to check it out go to wordsofwrath.blogspot.com. 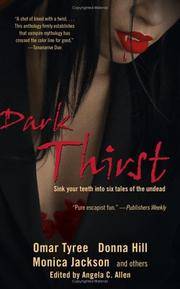 Jermiah Jefferson is another author who like L.A. Banks has written a series of vampire novels. Jermiah grew up listening to disco music and watching horror movies. She also loved to daydream and read. She has written non fiction, erotica and has written four books in the Voice of Blood vampire series. Some of her works include Wounds and A Drop of Scarlet. For more information about her go to: jemiah.com.

The authors above were authors that have written more then one horror novel but there are also some authors that have only one horror novel or is a writer of horror flash fiction or poetry that I wanted to mention also. One writer that I have to mention is Octavia Butler. Octavia wrote mostly science fiction throughout her life but she did write a vampire novel called Fledgling. Another great science fiction writer that has written some novels that could be considered horror is Tananarive Due; one of her horror novels  is called Joplin’s Ghost.

Another author I want to mention here  is Angella C. Allen who edited a vampire anthology by African American Horror Writers called: Dark Thirst. I also can’t fail to mention Michael Boatman who wrote a book about monster hunters called The Revenant Road which I will be reviewing on this blog in the next week or so. Last but not least is Andre Duza who has written a book about a zombie woman out for revenge against a serial killer called Dead Bitch Army. Once again, this is an incomplete list if you know of any authors that I forgot to mention please leave a comment.