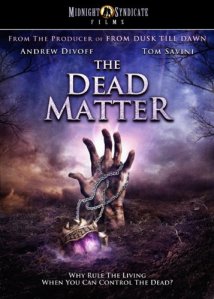 The Dead Matter DVD features the much-anticipated dark fantasy film produced and directed by Edward Douglas of Midnight Syndicate Films and Gary Jones and Robert Kurtzman of Precinct 13 Entertainment. DVD extras include two Midnight Syndicate music videos, the music video to Eternal Legacy’s song, The Dead Matter, three of the finalists from Midnight Syndicate’s 13th Anniversary Video Contest, audio commentary with the producers, gag reels, and a feature-length behind-the-scenes production entitled Maximum Dead Matter. Produced by Frank Purtiman of Smudgeline Studios, Maximum Dead Matter allows viewers to watch the film in one area of the screen while behind the scenes footage, interviews, location information, and concept art comparisons related to that scene play in other areas of the screen. 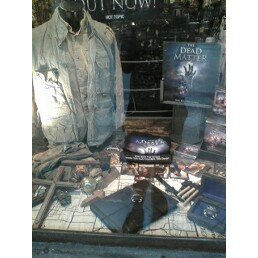 Midnight Syndicate’s Halloween Music Collection is a greatest hits-type CD that features over 60 minutes of songs hand-picked by Edward Douglas and Gavin Goszka to celebrate the band’s first 13 years. Both new CDs will also be available at Halloween retailers nationwide beginning in August.

About The Dead Matter movie:
The Dead Matter is the remake of a film that director/composer Edward Douglas shot on a shoe-string budget of $2000 back in 1995. The film tells the story of a guilt-ridden young woman (Sean Serino of The Rage) desperate to contact her deceased brother who discovers a powerful ancient relic that controls the dead.

Her dark obsession drags her into the tangled world of two warring vampire lords (Andrew Divoff of Lost, Wishmaster and Tom Savini of Friday the 13th, Dawn of the Dead) each with his own sinister plans for the artifact and a vampire hunter (Jason Carter of Babylon 5) who will stop at nothing to destroy it. This chilling gothic dark fantasy co-produced by Robert Kurtzman (creator of From Dusk Till Dawn, KNB FX) and Gary Jones (Xena, Boogeyman 3), also features a score by director Edward Douglas of the Gothic Halloween music band Midnight Syndicate. It’s a mix of classic horror themes with modern twists and a touch of dark humor that will keep you on the edge of your seat.

About Midnight Syndicate:
Midnight Syndicate has been creating instrumental Halloween music and gothic horror fantasy soundtrack CDs for the past thirteen years. The group’s music has become a staple of the Halloween season worldwide as well as a favorite in the haunted house, amusement park, role-playing game, and gothic music industries. From Universal Orlando’s Halloween Horror Nights and Hugh Hefner’s Halloween parties to Monday Night Football, X-Box games, the classic Dungeons & Dragons roleplaying game, and Barbara Walters specials, their CDs are designed to take listeners on a journey into the darkest corners of their imagination.