Research for a novel begins all around us. It can be experiences, feelings and desires. It’s when you start drilling down to the ‘nuts and bolts’ of a story that the research needs to and must take on a new direction.

In many ways, writing is like painting (I hope I’m good at one, but I know my drawing skills leave a lot to be desired!): there’s a canvas that needs filling in, layer upon layer until the finished piece is there is front of you, waiting to be critiqued, criticised and, one dreams, praised.

I wrote my first horror novel ‘Cold Runs the Blood’ in 2013, after years of painstaking development.

It’s set in a barbaric, brutal age, in Wallachia 1476AD – the medieval equivalent of today’s Romania. Because of that, it needed careful preparation.

I had the canvas (the place and the time) but needed to make sure that there was a story to tell. It’s no good having a great backdrop if there’s nothing to keep you looking at it.

But the very act of choosing that era meant there had to be a story in there somewhere, surely? Not necessarily.

For far too many years I care to remember, I’ve loved the vampire genre, the Dracula story, the Hammer horrors and all things that go bump in the night. I also fancy myself as a bit of an historian, nothing too extreme, just a bit of armchair research with maybe the occasional field visit if I’m feeling adventurous. And, importantly, I have always held the desire to write, ever since I knew which end of a pencil to use.

So these three aspects of me seemed to want to blend together somehow.

“I must write a gruesome, medieval vampire novel!” I therefore exclaimed once to anyone who was listening.

So I got a commission to script an audio episode of ‘Doctor Who’.

Then I wrote lots of short stories, in different styles, in markedly different genres. And then I started writing articles for various websites: reviews and features and the like.

It honed my writing skills. It allowed me to find a style that I enjoyed and that I hoped others did too. I learnt about pacing, character development, emotional journeys, the ruthlessness of editing.

And all the time I was doing all of that, I made copious notes, did research, read books all about medieval Europe, finding the darkest times and places where vampires would easily feature. I looked at the lives of warlords, despots and kept coming back to the one figure that stood out, the one man who was destined by the media of centuries to come to be reborn as a vampire count: Vlad the Impaler.

So I had my time, my place and my main character. But still no story.

The danger, you see, remained: it’s no good having a great character if there’s nothing to keep you interested.

So I began the arduous task of hammering out the plot, the all-important crux that the story hangs on.

And slowly and surely, I developed this fictional world set in a real historical time. Other characters emerged, situations arose and then, quite suddenly, the story revealed itself.

Interestingly, I had intended Vlad to be the antagonist, but he regenerated into a protagonist and not even the main character of the book. That was quite an interesting revelation. It meant I was not shackled by maintaining a true air of historical accuracy and I could create my own heroes and heroines and villains. If one of history’s most barbaric figures wasn’t the bad guy of the book, then how bad must the book’s bad guys really be!

Yet with all the vampires, werewolves and medieval warlords, armies and princesses crowding the pages, what was I trying to say? What was the story?

A good friend of mine who is far better at story-telling than I could ever be said to me a long time ago, “Elliot, write down in one sentence what your book’s about.”

So I thought long and hard. And it came to me.

Yes, it’s a horror novel with buckets of blood, impalings and vampire slaying but it’s about one man’s quest to clear his family’s name, to restore honour and make sense of the world he lives in. It’s a simple basis, but the canvas that I spoke about earlier became so enriched as a result, that I was determined to make sure I did the characters – all of them, major and minor – justice. And from that understanding, the other characters also had their reasons, their meanings of existence.

It’s easy to populate a fictional world. It’s easy to make that populous clichéd and two-dimensional. It’s harder, but certainly not impossible, to make them believable and fully-rounded.

And that’s one of the reasons I decided to cut my teeth on other projects before embarking on my magnum opus. To begin to understand how to write and to write effectively and believably.

At least that’s what I thought ‘Cold Runs the Blood’ was going to be: my magnum opus. But I’ve lots more stories to tell, lots more experiences to have and emotions and thoughts to put down on paper. And I’m still learning, still getting to grips with writing, still aiming high. I don’t think my magnum opus has surfaced yet.

And I’ll never stop writing. I can’t. It’s part of me.

And I’m looking at new projects, new opportunities. Writing a biography about Dean Martin is one. Returning to the worlds of ‘Doctor Who’ is another.

A sci-fi hero of mine once said that there are always possibilities. And I whole-heartedly believe him.

About Elliot Thorpe
Elliot Thorpe is a freelance writer, having previously worked with the sites Den of Geek, Shadowlocked and Doctor Who TV as well as forEncore, the magazine for the theatre professional, and The Dean Martin Association (www.deanmartinassociat.wix.com/officialdmasite),

Dino’s first official fan club. He was commissioned by Big Finish Productions to script Doctor Who – Cryptobiosis, starring Colin Baker and works with the London West End stage production The Definitive Rat Pack (www.thedefinitiveratpack.com). Elliot’s first novel ‘Cold Runs the Blood’ was released in 2013 and is available in paperback and as an ebook. He is currently working on a second novel as well as a biography of Dean Martin and is always looking for other writing opportunities.

A beautiful house – with a dark and deadly secret. Those who enter will be lucky to escape with their lives. ANGEL MANOR – November 14th

Let’s talk cheeseburger for a moment: “I haz excitement”

In about three weeks time my first full length novel will hit the market, and I can’t wait. It’s not the first novel I wrote (not by a long shot) but it will be the first that goes to print. It’s been a personal challenge writing this one.

First of all, I decided to work with a lot of different characters, which was new to me. Normally I focus my novels very much around one or two main characters and have a few side characters that get a tiny bit of the spotlight. In this case I had several different ‘voices’ and ‘points of view’, sometimes it felt like a juggling act.

When I first presented it to my publisher, it was a monster of a manuscript at 135.000 words. I think I may have heard him cry a little when he saw the size of it. Lucky for him, the manuscript was still in a very rough state, so it needed a bit of trimming. At the same time, lucky for me, the publisher did really like the story, and suddenly I had myself a book deal.

Some trimming was done, and some adding (the publisher slowly weeping again) and as I’m writing this blog, my manuscript is with the editors, so it will (hopefully) be ready in time for its November 14th release date.

So… why Angel Manor? I wrote this novel because I love haunted house stories, and I had some ideas for my own. I like working with classic horror topics and images, so when I started the first thing that came to mind was: this is going to need some creepy nuns. In hindsight, looking at the beautiful cover Stephen Bryant made for me, I’m very glad I went with the nuns.

As I was writing it, I decided that the story was too big for just one book, it needed more. Angel Manor was just the beginning *cue scary music* I’m going to work on at least two more novels following this one. Each will be linked to the fictional area called ‘Lucifer Falls’, which will be the storyline that runs through all three books.

For each of the novels I want to use a classic horror element. The sequel will focus on ‘dolls’, and I think the last one will probably focus on creepy children. Of course all books will have a healthy doses of ghosts and perhaps even other monsters.

This series will be interlinked with another series I’m writing –Celestials—and will exist in the same universe. I’m hoping to have some of the plotline bleed into each other, but in such a way that you can read the series as separate entities. It should just be a pleasant surprise for those who like to read both.

The cover for Angel Manor has done well so far, I’ve noticed that it gets a lot of interest. The artist really did a great job matching it to the story inside. I hope you will all enjoy Angel Manor when it comes out. I know I enjoyed writing it. It’s a little more gory than most of my work is at places, but it felt nice to go full out. I’m sure this novel is not for everyone, and part of me is dreading the reviews of the people who don’t like blood and violence. Only time will tell, I guess. 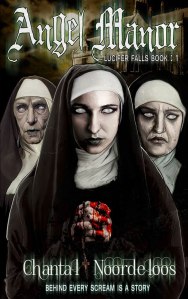 Angel Manor, the first full-length novel from Chantal Noordeloos, will be released by Horrific Tales Publishing on November 14th.

Evil nuns, satanic practices, and the most deadly haunted house in all of Scotland come together in this dark gothic tale.

“With ANGEL MANOR, Chantal Noordeloos brings a novel that grips you with corpse fingers and drags you into a world of deadly dangers, unresolved sins, haunted basements, and malevolent nightmares. This is not a book for the faint of heart. Noordeloos delivers on her promise to terrify you.” – JG Faherty, Bram Stoker and ITW Thriller Award finalist and author of CARNIVAL OF FEAR and LEGACY. 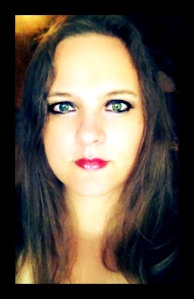 Chantal Noordeloos  lives in the Netherlands, where she spends her time with her wacky, supportive husband, and outrageously cunning daughter, who is growing up to be a supervillain. When she is not busy exploring interesting new realities, or arguing with characters (aka writing), she likes to dabble in drawing.

In 1999 she graduated from the Norwich School of Art and Design, where she focused mostly on creative writing.

There are many genres that Chantal likes to explore in her writing, but her ‘go to’ genre will always be horror. “It helps being scared of everything; that gives me plenty of inspiration,” she says.

Chantal likes to write for all ages, and storytelling is the element of writing that she enjoys most. “Writing should be an escape from everyday life, and I like to provide people with new places to escape to, and new people to meet.”

Sirens Call Publications is pleased to announce the release of the 13th issue of The Sirens Call celebrating women in horror and Women in Horror Recognition Month!

Packed full with fiction, poetry and photography by Dark Angel Photography, the 168 page issue also features an interview with Angie Gallow, author of The Coven. If you’re interested in giving it a read and supporting all of the wonderfully talented women who contributed their work, you can download it for FREE! 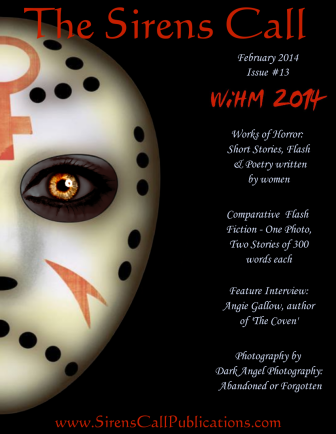