Hello, all you Horror Addicts out there! Are you ready for a new and a frightening good year of horror?! Well to get this year started I have an interview with the one and only Nathanael Munn, our Season 6 Best in Blood author.

I started off by asking Munn how he felt about receiving the title, to which he replied, “Well I felt surprised and honored really. It’s a good feeling to know that other people were entertained by one of my stories.”

He then added, “Well I’m not for speeches, but I would like to thank Horror Addicts for giving me the opportunity to share my work with their fans. And a really big thank you to all the Horror Addict Fans that listened and downloaded my story. Without them I could not have won.”

Now, what got our daring author into Horror in the first place you ask? “That’s a tough one. It’s not a story but rather real life. I believe my house was haunted by something. As a kid I had many a terrified nights tightly balled under my blanket. Listening to footsteps walk up down our long hallway followed by chilling feelings of not being alone. Sometimes hearing whispers. Without getting into much detail many things happened that even thinking back on it creeps me out little. I rely on my on the memory of what I was feeling at the time to aid my writing. Plus I like to let imagination run wild. But if you want to know a book that creeped me out the most when I was younger, here you go… I read a book called Hell Board by Dana Reed when I was in the 5th grade. It freaked me out. I never looked Ouija Boards the same way again… I think that book tied into the specter that haunted me at night led me down the path I have chosen to follow.”

All you horror fans better get yourself prepared because Munn is planning on “taking horror fans on new incredible journeys through the mind.” And, though Nathanael hasn’t made the plunge into e-books yet he did inform me that he is currently working on a Webzine. He also has a novella being released in March of 2013 titled, Derivation.

Welcome back Horror Addicts! To kick off our 6th season we have Nathanael Munn as our featured author for episode 59: 1500’s. This is Nathanael’s first time to be on HA and according to him, he is “honored to be here.”

While Munn wouldn’t tell me the name of his short story for the episode he did, however, give a short description. “Well I decided to do something different for Horror Addicts. Lets just say I hope to put the fear of god in you. I have written a Historical Horror fiction based around John Dee and Edward Kelly (who claimed to have the ability to transmute base metals into gold).”

Nathanael’s life revolves around writing. “[He] left the corporate life style, founded his website A.A. (Arcanum Axiom) and has never looked back.” Inspiration for Nathanael comes from anything and everything. To quote him, “I would guess that 80-90% of the horror you read is based off of something in real life and the rest is just embellishment.” Nathanael then added this little known fact about himself. “I look forward to having nightmares when I sleep. They serve as ideas.”

Back to Arcanum Axiom, I had to ask, “Why start the site in the first place?” Munn explained to me that [ A.A. is an ever] changing thing… At first I wanted a place that was just a strange mix of things to from Magic, Myths, to real world Science. Mix in some stories, good horror stories, along with some cool pictures. But this is all going to change as Arcanum dives deeper in the Indie Publishing World. I currently have someone behind the scenes redesigning the site. I think the new look and feel will be awesome.”

And for those of you wondering, the name Arcanum Axiom “just popped in my head one day. I don’t really know why but it just stuck with me. Plus I like saying A.A., people don’t forget that.” 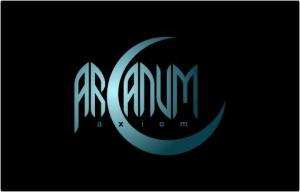 As Horror Addicts you’ve most likely heard of the Horror Zine that Arcanum publishes. The two issues currently out are Vampires and Angels & Demons. “The Horror Zine is [Nathanael’s] concept. Right now [they] are doing about 1 zine per quarter each with its own theme i.e. Angels & Demons.”

Interested in learning more about his work, I asked if he has any short stories or novels we could check out. Sadly, there isn’t…yet. “This is a sore subject for me. My first book has been delayed so many times that I have begun getting sick… I have now found what I hope to be my last editor so I expect it to be out really anytime in the next couple of months.”

When asked why he chose horror out of all the genres out there, Munn responded with “It just comes to me naturally – like it was somehow hard coded in my brain.”

Be sure to be on the look out for these up and coming projects: “the latest issue of the Horror Zine titled Ghosts & Haunts. Our lead writer for this issue Dan Dillard that just released another book. It is filled with great interviews, great art and great writers you can get a copy at the Arcanum Axiom website. Coming soon A.A.’s very first Horror Anthology: Paranoid Delusions – Webs of the Mind. Also in the fall, Arcanum Axiom will be releasing it’s first novel Lord Enoch.”

For more information on Nathanael Munn or Arcanum Axiom check out these sites: