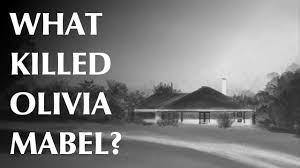 In the last episode, I gave a brief overview of tulpas or thought forms. That is so I can bring you this week’s Nightmare Fuel, the tragic tale of Olivia Mabel.

Olivia Mabel was a happy wife and mother living on a ranch just north of Dallas, TX whose life was rocked by the death of her son, Aiden, who was found dead in one of their ponds. Devastated, Olivia began drawing away from everything else in her life. She spent less time with work, friends, and church, and eventually divorced her husband before secluding herself away in her home.

On February 27, 1994, police arrived at Olivia’s home responding to multiple silent calls to 911. After repeatedly knocking on the front door without a response, the officers broke the door down. Inside the house was filled with dust, stale air, and neglect. They eventually discovered Olivia’s body in her son’s immaculately kept bedroom, sitting in a rocking chair in front of a shrine dedicated to Aiden and clutching a stick figure doll. Based on the state of her body, the authorities figured that she died months prior.

The altar to Aiden was what you expect to find for a grieving parent: personal possessions of his, letters from his mother to him, hand-drawn pictures, candles, flowers, and an urn filled with ashes. Affixed to the front of the altar was Sanskrit writing that translated to “construct” or “to build.” These elements contributed to a feeling of an “angry presence” in the home.

Before long, some people began piecing together a theory on what may have happened to Olivia Mabel. They believed that the constant concentration, thoughts, and effigies focused on her son may have created a tulpa version of him. What is most disturbing about that is, if true, it is the first case where a tulpa is believed to have killed its creator. Fueling this is a note found at the scene from Olivia to her son which reads, “My Aiden, I’m sorry. I’m so sorry. I should have never let it get like this. I’m leaving. I will not let you keep me you ViLE, EViL CREATURE. Mommy’s coming for you, Aiden, my sweet Aiden. Mommy loves you.” What makes this note especially odd is that the letter was dated February 27, 1994, many months after her estimated death.

Did Olivia die of a broken heart, or did she create a tulpa of her son, who later killed her? If she did create a thought-form, what happened to him? If not, who placed the phone calls to 911? Is this case unique, or just a mischaracterization of a heartbreaking tragedy? We may never really know.

Until next time, Addicts.