Issues 2 & 3, Third Flatiron’s Strange Beasties, and Tales to Terrify. Her debut collection, Something Borrowed, Something Blood-Soaked, is available now from Unnerving, and won the 2018 Indie Horror Book Award for Best Debut Collection.

Christa is an intriguing and intelligent woman. We spoke of writing, inspiration, and influential authors.

NTK: Thank you for joining me today, Christa.

CC: Thank you so much for having me!

NTK: Could you tell the Horror Addicts how you got interested in horror?

CC: Some of the first books I devoured were the ones in the Bunnicula series, as well as the Goosebumps and Fear Street books by R.L. Stine. I actually had a rather bizarre experience when I was in third grade… I went to a friend’s birthday party (I say ‘friend’ lightly, I think she was more of an acquaintance), and it was a slumber party. There was talk that we were going to partake in some mystical thing called a “Double Feature,” but when the movies in question were revealed, my nine-year-old self was horrified. After being subjected to Leprechaun and Nightmare on Elm Street 3: Dream Warriors, I walked around in a very Elm Street-esque, sleepless daze for about a week before the memories of those terror-inducing films began to lessen. I steered clear of horror after that for about four years, then gave it another change with Halloween when I was about thirteen. Though I still ruminated long into the night over the chances of Michael Myers making his way into my bedroom, something about this experience must have struck a chord within me, because from that moment on, I was hooked.

NTK: Who are your writing influences?

CC: I’ve split this list between authors who inspired me to first pick up a pen and authors who inspire me to continue writing on a daily basis. That list of authors I grew up reading and wanting to emulate includes R.L. Stine, as well as Stephen King, Shirley Jackson, Dean Koontz, Frank M. Robinson, Mary Shelley, Margaret Mitchell, Sarah Waters, Sidney Sheldon, Harper Lee, Edgar Allan Poe, and Dan Simmons.

NTK: It’s a great list! Christa, where do you find inspiration? And, what inspired “This Our Angry Train?”

CC: I find inspiration everywhere, as cliche as that may sound. I’ve had stories spring from the strangest of places as well as from the most innocuous ones, from a flock of extremely over-sized turkeys roosting on tree branches that seem destined to collapse beneath their weight to everyday hummingbirds sipping from their plastic feeders, from a cyber attack that led to enigmatic photos appearing on my cell phone to your regular old post or news article scrolled past before bed. In some instances, the inspiration behind a story is a great deal more direct than a reader may anticipate, and in the case of “This Our Angry Train,” the events that led to the story were indeed a matter of life informing art.

In the summer of 2016, I attended an event in Brookline, Massachusetts that featured Joe Hill, Paul Tremblay, Kat Howard, and Thomas Olde Heuvelt. Joe Hill ended up mentioning Kelly Link’s “The Specialist’s Hat” over the course of the discussion, and I spent the train ride back to Westerly reading Link’s bizarre and thoroughly unsettling story. Upon finishing it, I experienced this strange half-waking dream during which I became certain I was no longer on the same train I had boarded.

When I sat down to write my story of a train as an extension of a young woman’s fears that she is not as far removed from the bad decisions of her past as she might have thought, that she may, in fact, be heading backward without even realizing she’d changed direction, my pen couldn’t move across the page fast enough. After completing the first draft, it occurred to me that the story might benefit from an element of connective tissue, some incantation all the characters on this midnight train to madness know and feel the need to recite.

I knew of Joyce Kilmer from his poem, “Trees,” but I simply Googled ‘poems about trains,’ and found “The Twelve-Forty-Five” after a minimal amount of research. In the same way that the excerpts from ‘An Oral History of Eight Chimneys’ are weaved throughout the narrative of “The Specialist’s’ Hat,” the stanzas from “The Twelve-Forty-Five” are meant to break up Lauren’s train ride fever dream, and ultimately contribute to the mounting horror.

NTK: Where do your characters come from? Do they have free will? Or do you direct their actions?

CC: While I want my stories to be character-driven, I usually come up with the idea for a story first, and the character is contained within that story idea. For example, if I wanted to tell a story that says something about women being routinely disbelieved, and how this is a serious a problem whether it’s within the plot of a horror film or in real life, at, say, a doctor’s office where an M.D. is telling a woman that everything is fine because he believes she is exaggerating her symptoms, or when a woman is kidnapped or killed by her stalker because the police didn’t believe her when she said he was a threat, then I would start to write the draft of that story, and find my protagonist coming to life from one scene to the next, fulfilling the needs of the narrative.

I used to think I directed my characters’ actions pretty much across the board, with occasional surprises where they’ve gone off in a direction I didn’t see coming. With that being said, I’ve found that my characters are acting of their own free will more and more, and I can probably chalk that up to feeling more comfortable with my story-telling abilities the longer that I write.

CC: I do love the original Halloween (and the remakes that Rob Zombie directed, which might earn me a few groans of disgust from die-hard Carpenter fans), but the 2013 remake of The Evil Dead is my favorite horror film of all time. I love it because, in addition to existing within the Evil Dead universe, it introduces fans to a new protagonist in Mia. Plot-wise, it’s pretty straightforward: Mia is brought to a rundown cabin in the woods by her brother and her friends in order to detox from heroin. That everything this Ash Williams-worthy heroine endures after her arrival is borne while simultaneously going through cold turkey withdrawal, propels this film into territory that, for me, far surpasses a simple supernatural horror film or a wannabe Evil Dead installment heavy on the gore.

The film is like a perfectly constructed layer cake. The death scenes are memorable, the horror is palpable, and yet, there is an entire subplot in which a very real and fleshed-out character is struggling to overcome a very real and highly formidable affliction. Writer/director Fede Álvarez’s decision to have Mia’s addiction provide the foundation for her strength in fighting off the evil that possesses first her, and then her friends, is truly commendable. It gives the Final Girl’s gumption the backstory it deserves.

I’ve always found the final scene to strike such an intensely visceral emotional chord: as the blood-rain pours down, Mia’s evil doppelgänger prophesizes, “You’re gonna die here, you pathetic junkie.” To which Mia responds, like an addict who has crashed to rock bottom and is finally on the verge of change, “I’ve had enough of this shit.”

NTK: Do you have a favorite horror TV show?

CC: Unsurprisingly, my favorite show (although sadly, it was canceled after only three seasons), is Ash vs Evil Dead. With her character, Kelly Maxwell, Dana DeLorenzo does Bruce Campbell AND Jane Levy proud.

NTK: What does the future hold for you, Christa? What works do Horror Addicts have to look forward to?

CC: I have a fair amount of forthcoming fiction and nonfiction this year, including a 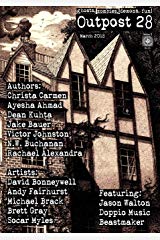 piece of flash fiction entitled “Shadows” in Issue 4 of Outpost 28, planned for July or August of this year, and a reprint of a story called “Three Cheers for Sweet Revenge” to air on The Wicked Library podcast (the story originally appeared in Issue 2 of Outpost 28) There have been a few delays in publication, but I have two stories coming out with Chilling Tales for Dark Nights, “Shark Minute” and “What Are Little Girls Made Of?”, the first as part of a Scary Stories to Tell in the Dark tribute anthology, the second on The Simply Scary Podcast Network. I’ll have a story appearing in a middle-grade graphic anthology coming out in October of 2019, and I have two other stories coming out in unannounced anthologies, later in the year. My nonfiction essay, “A Ghost is a Wish Your Heart Makes,” will be published in a scholarly anthology of articles on Netflix’s The Haunting of Hill House series. I also have a story, “And Sweetest in the Gale is Heard” appearing in the Not All Monsters anthology, edited by Sara Tantlinger and to be released by Strange House Books in the fall of 2020.

After that, I hope to release either the novel I’ve been working on for the past two years, Coming Down Fast, or the new novel I’ve planned for my thesis at Stonecoast (MFA program at the University of Southern Maine), which is a historical horror novel, the details about which I won’t say too much more.

NTK: Congratulations! We’ll look forward to it. Thank you for chatting with me, Christa. You’re a delightful guest.

CC: Thank you so very much, Naching and HorrorAddicts for having me, and for posing such fun and horror-centric questions!!!