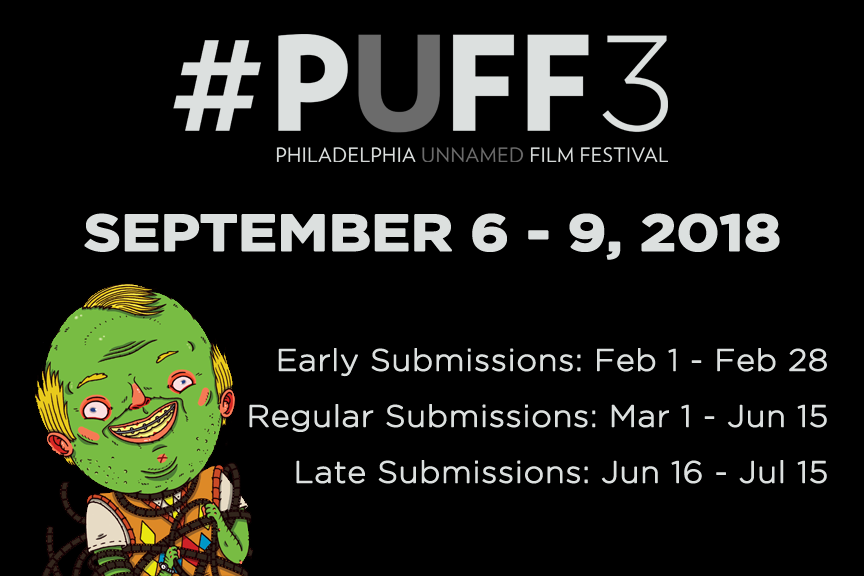 PHILADELPHIA, PA,  —  Submissions are now open for the 2018 edition of the Philadelphia Unnamed Film Festival, which officially announces its return for a third consecutive year of showcasing the latest and greatest in genre cinema. Returning to the Proscenium Theater at the Drake in Center City, Philadelphia, PUFF3 will run from Thursday, September 6, to Sunday, September 9, featuring four full days of strange, sordid, and spectacular offerings from international and regional independent filmmakers. In addition to their feature and short film categories, the Third Annual Philadelphia Unnamed Film Festival will also be debuting a brand new micro-shorts category that will shine a spotlight on short-form unique and experimental films from emerging digital platforms.

The brainchild of genre film aficionados Madeleine Koestner and Alex Gardner, the Philadelphia Unnamed Film Festival has become the underground sensation of the Philly indie film scene. With a weekly horror screening series and burgeoning spin-offs, 2018 aims to be the biggest and boldest year yet for the festival, which has previously featured such notable films as Tragedy Girls, We Go On, Imitation Girl, and Karate Kill. Additionally, PUFF touts an excellent success rate for their selections, with almost all feature films from the first two years of the festival receiving independent distribution.

In addition to the newly announced dates, PUFF3 has also opened early submissions for filmmakers to enter their micro-short, short, and feature length productions into the fest, with special low-rate entry fees for submissions between February 1 and February 28. Submissions will commence under standard rates March 1 to June 15, followed by the late submission period from June 16 to July 15.

All films playing in competition at PUFF3 will be eligible for three different awards, each of which will be represented by a tiara in PUFF tradition: the Best Feature Award, Best Short Award, and Jury Award. Furthermore, PUFF3 will also crown a new figure in the independent genre scene with their Legacy Award.

Prior to PUFF3, the Philadelphia Unnamed Film Festival will continue to collaborate with Philly’s South Street Cinema on their weekly screening series. Curated by Gardner, these screenings have built much buzz among the city’s genre crowds, who have flocked to check out such festival favorites as Hounds Of Love and Mom & Dad as well as cult classics and local programming. Likewise, PUFF will be bringing its brand of askew cinematic fun to the West Coast for the Unnamed Footage Festival, a collaboration with the Bay Area’s Overlook Theatre. The Unnamed Footage Festival will feature two days of found footage horror at San Francisco’s Historic Balboa Theater from March 24 to March 25. More information can be found on the event website.

To submit to the Third Annual Philadelphia Unnamed Film Festival, please visit the festival’s pages on FilmFreeway and WithoutABox. To keep up with the latest happenings from the Philly Unnamed team, you can follow the event on Facebook, Twitter, Instagram and YouTube. 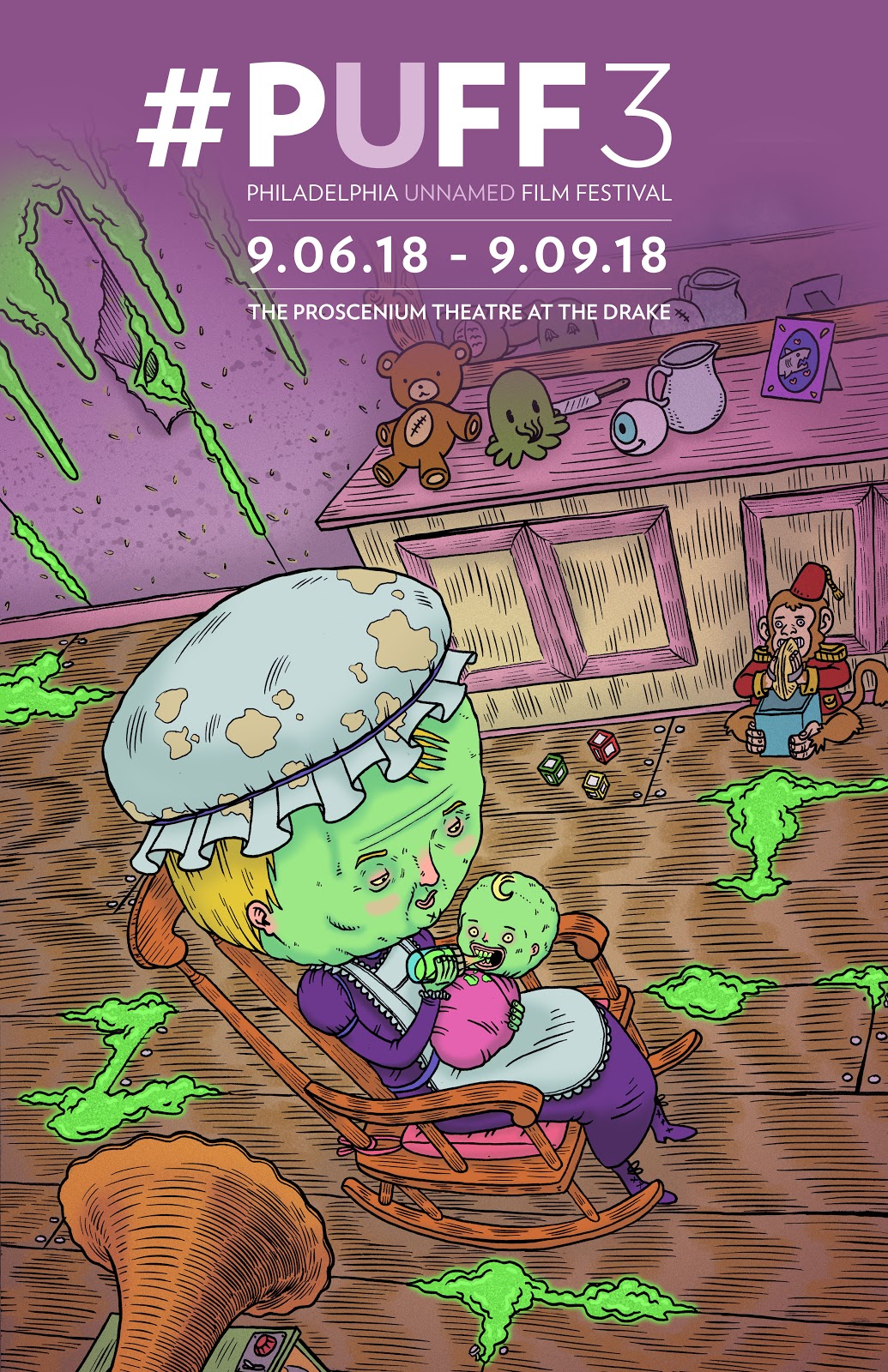 Badges are now on sale for the 2017 Philadelphia Unnamed Film Festival to coincide with the initial lineup announcement for the second edition of the fest, with more exciting movies, guests, and events to be added in the coming weeks. This year, the Unnamed Film Festival has been expanded to include a slate of over 30 short films and features from around the globe, in a larger venue in the heart of Philadelphia.

The fest opens on Thursday September 28th with a pair of features and our Opening Night reception. The evening kicks off with a screening of IMITATION GIRL, a dreamy science fiction film meditating on the nature of self, starring Lauren Ashley Carter (JUGHEAD, DARLING) and directed by by Iranian-American filmmaker Natasha Kermani. Kermani will be in attendance for a Q&A following the screening, which will then lead into the opening night reception with drinks and hors d’oeuvres for badge and ticket holders.

PUFF Media Sponsor, Arrow In The Head will then help us usher in the opening night feature: Damien Leone’s much anticipated TERRIFER! The movie continues the exploits of the homicidal Art the clown from the anthology film ALL HALLOWS’ EVE, with some of the craziest and most creative kills to ever be projected in Philadelphia!

The Friday late night movie is an unclassifiable oddity that could never be found on mainstream screens: Peter Vack’s directorial debut ASSHOLES. Called a “microbudget cross between SALO and THE SQUID AND THE WHALE” by IndieWire, ASSHOLES begins as clever indie comedy before degrading into a mumblecore body horror that would make John Waters proud.

The fest continues into the weekend with such offerings as the Northeast Premiere of CHARISMATA, a stylish and mind-bending serial killer thriller from the UK, followed by a Q&A with director Andy Collier.  PUFF 2017 sticks close to its horror roots with the slasher flick RUIN ME as its late night Saturday feature. Reminiscent of the 1986 classic APRIL FOOL’S DAY,  RUIN ME finds its setting in an immersive horror game in the woods that turns deadly.

As always, PUFF will highlight Philadelphia’s local talent on Sunday, October 1st. Sunday kicks off with the Icelandic supernatural drama RIFT, presented by the Philly based distribution company Breaking Glass Pictures. Our regional spotlight continues with the world premiere of the Pennsylvania slasher film 100 ACRES OF HELL, starring professional wrestler Gene Snitsky, with a cast and crew Q&A. The local program will then wrap with PUFF presented local shorts on late-Sunday afternoon.

PUFF 2017 will take place September 28th to October 1st at the Proscenium Theater at the Drake (located at 302 South Hicks Street, Center City, PA). The festival will also include an art show in the lobby presented by local art collective The Jerks, additional Q&As with cast and crew, and wine and beer at the theater concession stand. Stay tuned for additional announcements, including more guests, PUFF short film selections, and the closing night film!

Badges are now on sale through FilmFreeway: https://filmfreeway.com/festival/PhiladelphiaUnnamedFilmFestival/tickets

To stay updated on future announcements and our PUFF Presents series follow us on:

October 21st / End of the Earth art show and Zombie Walk / Mason, Ohio / This art show features paintings that show what the end of the world will be like,  there will also be several local bands performing and a zombie walk. For more information go to: poprevolutiongallary.com

October 22nd / Dorian’s Parlor Grand October Ball / Philadelphia, PA/ Dress up in your favorite Steampunk, Neo-victorian, Neo-Vintage, Victorian Ball gowns and dance all night to celebrate the changing of the seasons and All Hollow’s Eve. Cost is $25 and there is a $500 prize for best costume. For more information go to: doriansparlor.com

October 26th / The HORRORphiles #8 Miedo Mashup 3 / New York, NY / Come out and celebrate the work of Latino horror filmmakers. There will be movie clips shown along with a costumed cocktail reception and a Q and A with the directors. For more information go to: http://www.latinhorror.com/horrorphiles8/.

November 4th – 5th  / Drunken Zombie Film Festival / Peoria, Illinois / This film festival includes the best in low budget filmmaking, some of the movies at the fest include: Dead Bodies Everywhere, Fitness Class Zombie and Thy Kill Be Done. For more information on this event go to: drunkenzombiefilmfestival.com.

November 10th – 13th / Buried Alive Film Fest / Atlanta, Georgia / This event supports underground film making and independent horror. Some of the movies being shown are Terry Gilliam’s The Legend of Hollowdega, She Wolf Rising, Necromance and Satan Hates You. There will also be a horror art show. For more information go to: buriedalivefilmfest.com.