Welcome to the Show
Reviewed by Voodoo Lynn 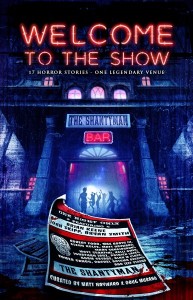 Reading this anthology reminds me that not everything that is written is your favorite, standing coffee order and that sometimes, something different can be a good thing. There are enough stories here that are written by Bay Area natives to inject just enough truth (whatever that word may mean to you) to make everything plausible. As a lifelong Bay Area native, I have haunted various San Francisco bars and venues, especially when I was an intern at a well-established and known indie label. I have seen everything from burlesque to punk, to spoken word to I don’t know what the hell to call it. I have many fond memories of those shows and wouldn’t trade them for anything. The descriptions of this place, ring true to me.

Like every venue, the Shantyman has its own vibe. From its dark inception to its dystopian future of outlawed music, this venue follows a dark, sinewy path of death and destruction that both ravages the innocent and guilty alike within its infamous walls.

You have a selection of seventeen stories to choose from in this collection, so I know there will be something for everyone. I have to say this is one of the most diverse books I’ve ever read. Now, that’s not saying that I liked every story because I didn’t. In fact, there was more than one story that I felt fell short of the mark and could’ve been fleshed out more instead of giving it the ‘…and everyone died…’ ending. Having said that, let me take you through some of the highlights in this book.

The first story from this collection is “What Sort of Rube” by Alan Clark. This story is based in the 19th century and illuminates for us the very dubious beginnings of this infamous venue. It is narrated by a sailor, so the requisite amount of jargon is utilized but not so much as to take away from the story. It begins with one curse. A curse for revenge. A curse for love. Crazy, stupid love. And its basis is in, music. It’s always about the music. It is the alpha and the omega and through the burning fires of revenge, the stage is set for the damned and unlucky alike, to bear witness to the performances in the Shantyman.

The next story liked was “In the Winter of No Love” by John Skipp. This story moves us forward to the summer of love era and a sense of the free love/freedom movement of the 60’s. It also takes us to the darker reality of that line of thinking, to the shattered dreams and memories of an idea that never came to fruition. The main character, Marcie, says that she “tastes” the history and creepiness of the venue and yet, she stays to watch the show of a lifetime. To me, that speaks volumes of the dark allure of the Shantyman. Interesting detail, the author mentions that Marcie is from Milwaukee and at one point, talks about how Marcie is 2173 miles away from the Shantyman door. 2173 is exactly how many miles San Francisco is from Milwaukee. Details. I love little details like that. So, aside from details, this story wins in the category of most unusually imaginative description of the end for the main character and all those poor bastards that was there for that show. I would’ve never seen that end coming. The ending, interestingly enough, is met by a character that reminds me of a very famous 27 year old poet/musician that died way too young. His character, this angel of mercy so to speak, exemplifies the 60’s philosophy on life. Plus, I totally dig the song lyrics in this story. Very groovy…

The last story I want to touch upon is “We Sang in Darkness” by Mary San Giovanni. It is the last story in the collection and it is by far my favorite. It’s set on the future, a sad, dystopian one that is totally plausible. Perhaps it is the conspiracy theory element that currently rings so true. With more and more criticism of fake news and mainstream media and its exclusion and downplaying of important stories, it is the conspiracy theorists that are gaining more traction and followers. Maybe I like the physics aspect of it discussing experiments with electromagnetic fields in the sky (can anybody say HAARP?) and how it was these experiments that caused one of the greatest tragedies of humankind, the complete utter ban on music for the safety of the planet all because the vibrations attract creatures from another dimension which are needless to say, dangerous. It is from here that I have my favorite quote from the story:

“I’d say I saw humanity there, but who’s to say that thoughts and feelings are the exclusive domain of human beings?”

Indeed. The story is so plausible that you can imagine the apocalyptic end of life and society as we know it and the beginnings of a new one, void of such an integral part of us as human beings- music. The main character perfectly illustrates how music has the power to help and change people for the better and we are reminded of how much we really lost because of him. Throughout this story I kept hearing the theme to the X-Files going through my head and though Mulder and Scully don’t arrive just in time, some feds at the end did and we all know what happens to eye witnesses to strange things and the feds…

I can’t say this is the best collection of stories that I’ve read but it is certainly a good one and I enjoyed it. It’s good enough for me to forgive what I call “The Little Story that Could’ve Been” that had a main character that reminded me of Alice Cooper placed into “Rock and Roll Nightmare” instead of Thor. I mention this because this story, that shall remain nameless, was one of my favorites until it just died a quick, uneventful, predictable death. I hope the author of it someday decides to expand on it because it could’ve been something.

Just like many of the Shantyman’s performers and audience members. People whose lives were cut short within the venue doors. Whether it’s cults, sea creatures, time travel, or vampires (I told you there was variety) I’m sure you’ll find your own ticket to ride within the pages of this anthology.