Best In Blood for season 4 is none other than Chris Ringler.

“I am really excited and utterly surprised to be voted Best In Blood. It was such a strong season and there were such good stories and I am just thrilled that the readers really connected to the story so it feels great. Sorta speechless, actually,” Chris told me.

He then added, “This really is a great honor for me. While I have been writing for some twenty years now it is always great when a story connects with the audience. As much as I am a writer, too, I am a huge nerd, and I find when I read things I know what I want from that story and I know whether or not it delivers and it is great to get an honor like this because it means you did something right. It’s not often that a self published author gets much acclaim or acknowledgment and that your readers dug the story means the world to me. Sometimes you never know if people are getting into what you are writing and winning Best In Blood is a great boost to my confidence.”

This is the second time I’ve have the honor of interviewing Chris. The first time being for the 13 Questions series. I did my best to get new information for all you Ringler fans out there.

Did you know: “I started really early with horror movies, seeing Friday The 13th at a drive in when I was six so I have always loved horror. I was into horror movies, seriously into them when I was around ten and that built the base of my movie nerd status. As a writer it was Stephen King, Clive Barker, and H.P. Lovecraft that got me into horror stories. It seems like everyone cuts their teeth on King these days and I am no different – that is probably why I am drawn to the occasional grim ending to a story. The three big books for me when I was a teenager though were At the Mountains of Madness, The Shining, and The Damnation Game. Great, great stuff.”

Also, “when [Chris] was eighteen some friends and [him] were making a horror movie. [He] was scouting a cemetery location with [a friend] and little did [they] know but a local serial killer had hidden two bodies near where [they] were scouting. [The bodies] and him were discovered not long after [they] had shot our scenes there.

Ringler’s goals for the future are “oddly enough, split between [his] local artistic endeavors and [his] writing. [Chris] will always write, and [he intends] to keep getting the work out there one way or another, but [he is] also active in the arts scene here in Flint, Michigan and [is] getting art shows and other funky events going here. [Ringler] definitely wants to be able to do more conventions and get [his] books out to more people and to get all of [his] books fully converted for e-books. Beyond that it is just about writing and art for [him] and working to get better at both. Oh, and [he wants] battle some manner of cryptozoological creature in a cage fight. [He needs] to train but [he] can do it.”

Fans, be sure to keep an eye open for Chris’ upcoming projects. “I just finished work on a couple new stories that are for

an anniversary issue of a ‘zine some friends and I did in the 1990s. I am also working to finish a couple stories that will be part of a collection coming out in Spring of this year. It will be called The Kreep Sheep and is another collection of stories connected to my book The Meep Sheep. I have several art shows happening here in the Mid-Michigan area. Putting together a top secret show for late in the year around here that will be fun. I have my novel A Shadow Over Ever in a friend’s hands for editing and will release that in 2012. I am going to try to do a couple conventions in my area. And finally I am supporting my previous books as well as Red Dreams, which came out the first of 2011 and which has Pyramids and Butterscotch in it (under the title From Distant Temples).”

Chris had some parting words for everyone, “I am just so honored to receive the Best In Blood, it’s hard to tell you how great it feels. And honestly, what people need to remember is that whatever their passion is they need to pursue it. Even if you don’t make a living at it, if it makes you happy then you have to find time to pursue it. If you follow your passion you will find people that will appreciate it because people will always connect to things done with passion. Oh, and floss, which I hear is very good for you, despite my not doing it myself.”

For more information on Chris Ringler check out these sites:

www.meepsheep.com (You can order his books here, as well as view his art) 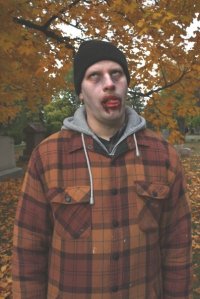