Imagine haunting melodies, powerful rhythms and beautiful vocals all woven together over poignant lyrics. There you have James Perry. We 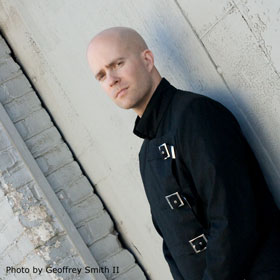 had a chance to speak with him regarding his newest work, where it all came from and where it’s all going. Here is what he had to say.

1. First of all, love your stuff. The fans at HorrorAddicts love it too. The first I notice in your bio is that you have two projects going on: your solo project and an industrial band called Deathline International. What is the story behind both of these projects? How did they come to be?

Thank you! Well, I haven’t been with Deathline from the very beginning, but I can tell you about how I got involved in the band. About 8 years ago they were preparing to do a short tour, but one member was unable to get the time off work, so my friend Eric Gottesman, who was playing guitar and percussion for them at the time, recommended me. Even though it was a short term thing I took it very seriously and worked very hard to learn the songs and do the best I could. And now, 8 years later, I’m still playing with them! And incidentally, the guy I filled in for is actually back in the band. We’ve been working on new material for some time now and we contributed a track to the “Electronic Saviors” compilation on Metropolis Records. Hopefully we’ll have more new stuff out there soon. 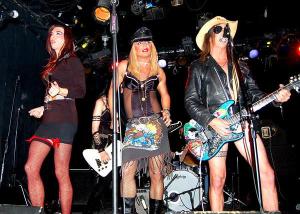 If “glam goth” could be personified into one band, self-proclaimed “intergalactic space sluts” Robbie Quine & The Barbarellatones are definitely it. With their very catchy gothabilly sound and humorous lyrics, they definitely poke fun at themselves and the goth scene. However, their list of accolades reminds the listener that The Barbarellatones are no joke. In addition to receiving radio play and glowing reviews from many scene magazines, their song “Fire of Love” was used in the “Luxury Lounge” episode of The Sopranos.

In the end, The Barbarellatones really must be seen to be experienced fully. According to Robbie, they feel strongly that rock music should be sleazy and glamorous. And baby, they bring it. What else can you say about a band that covers “Time Warp” from Rocky Horror Picture Show that well? All the way to the hilariously catchy and almost anthemic “Grab Your Ankles,” The Barbarellatones deliver.