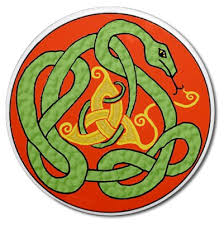 Today is St. Patrick’s Day!  Pious legend tells us that St. Patrick drove the snakes out of Ireland.

“…Scholars suggest the tale is allegorical. Serpents are symbols of evil in the Judeo-Christian tradition—the Bible, for example, portrays a snake as the hissing agent of Adam and Eve’s fall from grace.

The animals were also linked to heathen practices—so St. Patrick’s dramatic act of snake eradication can be seen as a metaphor for his Christianizing influence.”

Well, the snakes aren’t taking this lying down!  In the wonderful world of the movies, quite a few directors have given the snakes the upper hand.  Feel like supporting the downtrodden snakes?  Looking for something scary to take the shine off all the shamrocks and pots o’ gold?  Watch some of these tributes to reptilian menace!

A remarkably bad movie, “Sssssss” features Dirk Benedict of “Battlestar Galactica” and “The A-Team” fame as David, a college student looking for work.  Dr. Stoner hires David to be his lab assistant.  That turns out to be a very euphemistic job description.  David begins to fall in love with Dr. Stoner’s daughter Kristina, played by the Heather Locklear of the ’70s, Heather Menzies.  If you wanted a hot blonde in your movie, Heather Menzies was the first choice.  Dr. Stoner is at work on a secret serum aimed at creating a new, improved King Cobra.  He just needs the right kind of lab rat for the final trial.  If MST3K had been around when this movie was made, “Sssssss” would have been perfect fodder for comedy and sarcasm.  If you’re looking for an attractive cast doing some really strange things in low-budget makeup, pop yourself a big bowl of popcorn and settle in for some fun.

Former star of “Lois and Clark: The New Adventures of Superman,” Dean Cain leads the team that goes to the site in the Antarctic where a supermax prison is being built, one that will house the worst of the worst criminals.  There’s a mining operation within the prison complex.  The miners have discovered an unusual rock formation.  In the fine tradition of “what man was not meant to know,” the scientists go poking around and wake up the unpleasant prehistoric creature trapped inside the formation.   Will the scientists and the small group of soldiers manage to defeat the creature before they too succumb to its scaly rampage?  Wrap up warm and watch this one with the lights out!

Continuing our theme of TV stars who really should have known better, among the cast of this snake-gone-wild flick is Pat Morita from “The Karate Kid” movies and Erik Estrada, best known as Officer Poncherello on “CHiPs.”  This time around Dr. Irwin Burns is the maverick scientist conducting unwise experiments with a drug that will make humans and animals more aggressive.  Among the good doctor’s test subjects is Seth, half African King Cobra and half Eastern Diamondback.  These are two bad ass species of snakes to begin with, so when Dr. Burns shoots Seth up with the Aggro Elixir, all hell breaks loose and Seth escapes.

A military plane crashes, allowing the giant man-eating snake that was its cargo to escape and menace the small town nearby.  This time around the scientist is the good guy.  Between his knowledge of herpetology and several locals armed to the teeth, the humans will taken on this mutant nightmare.  Yes, that is a silly plot.  This is a perfect vehicle for Casper Van Dien, king of the B-movie action flick.  The helpful scientist is played by horror icon Robert Englund, who gets all the best lines and makes the most of them.  No monster movie is complete without its gorgeous scream queen.  Believe it or not, Jenny McCarthy herself appears in this scaly version of “High Noon.”

William Katt, star of “Carrie” and “House,” must have enjoyed working with snakes.  His filmography includes two monster snake movies that must be seen to be believed.

Here we have another cautionary tale about man’s intrusion into unspoiled nature having dire consequences.  William Katt plays Paul Donohue, the brilliant mind behind the design of a new development for a small community.  (One wonders why such a top notch architect is working in such a remote location.)  When breaking ground, construction crews may well discover items they did not expect, such as the bones of First Nations tribes or even older archaeological artifacts.  Nothing so ancient lies in wait here.  There are, however, hundreds of extremely annoyed rattlesnakes shaken out of their lairs by all of the construction crew’s blasting.  Having been forcibly evicted from their hunting grounds, the rattlesnakes are looking to relocate.  Moving is always stressful, and of course it makes the snakes work up quite and appetite!

This is an entertaining variation on the “car breaks down near a scary old house” plot.  The movie opens with a happy group of American tourists traveling down an African river, seeing the sights.  Circumstances force them to land on Snake Island.  Those circumstances get a whole lot worse when the intrepid explorers are trapped on the island overnight.  There are snakes.  Thousands of mean, nasty, and above all poisonous snakes, and they do not appreciate trespassers.

A National Geographic documentary crew goes to the Amazon.  They probably know what they’re doing, right?  They do, but they are not prepared for the hidden agenda of the hunter they meet along the way.  This guy is nuts.  He is the Captain Ahab of the Amazon, and his White Whale is the biggest, most lethal snake on the planet.  This is one of those movies I would watch just to see how this cast works with each other.  Jennifer Lopez and Kari Wuhrer must cope with the insane hunter and his monstrous prey, accompanied by John Voight, Ice Cube, Eric Stoltz, Owen Wilson, Johnathan Hyde, Danny Trejo, and even the great voice actor Frank Welker as the voice of the Anaconda!  I may have to go watch this again!

No list of snake movies could possibly be complete without this masterpiece of humor and horror.  The great Samuel L. Jackson plays FBI agent Neville Flynn, responsible for transporting a key witness from Hawaii to Los Angeles so he can testify against big time mobster Eddie Kim.  In the cargo hold is a nasty surprise from Mr. Kim designed to make sure the witness never makes it to L.A. alive.  A crate full of snakes would be bad enough, but Mr. Kim takes additional precautions to make absolutely sure his plan succeeds.  Snakes don’t really bother me, not the way spiders do, so I thought I could watch this movie just for the fun of Samuel L. Jackson.  Oh no.  I was jumping and shrieking and hiding my eyes along with most of the passengers on that plane!

What Little Boys are Made of

Tina pushed down hard on the X-acto knife until it went through Martin’s skin with a little pop. Martin whimpered through the gag and tears fell from his eyes. With an exasperated sigh, Tina looked at her friend.

“You brought this on yourself,” Tina said, “so you can just be quiet.”

Leaning forward to add her weight to the blade, Tina dragged her hand down toward Martin’s belt. She stopped at his bellybutton. Setting the bloodied knife aside, Tina pushed her fingers into the wound. She grabbed the edges and pulled them aside, exposing Martin’s organs.

Frowning, Tina poked around inside her friend’s body cavity, pushing aside guts and organs. After a moment, she stopped and flicked the blood off her fingers.

Martin’s eyes were fluttering, fighting to stay open. They fixed on Tina’s as she looked down at him.

Ken MacGregor’s work has appeared in dozens of anthologies, magazines and podcasts. Ken is a member of The Great Lakes Association of Horror Writers and an Affiliate member of HWA. Ken’s the kind of guy that, if he found himself stranded somewhere with you, would probably eat you to survive. Ken lives in Michigan with his family and two unstable cats. His author website is http://ken-macgregor.com.