A heartfelt performance by Matt McCoy as Preston Rogers and a virtuoso soundtrack by Argentinian composer Lalo Schifrin elevate the 2006 film Abominable above the average creature feature. 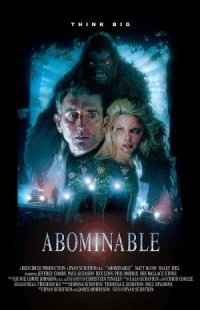 McCoy is best known to horror fans as husband Michael Bartel in 1992’s nanny horror-thriller The Hand That Rocks the Cradle and to many others as gum-chewing mental patient Lloyd Braun on Seinfeld. However, his performance as Preston Rogers ranks among the best on the list of lead actors in Bigfoot horror films.

Abominable follows Preston after being paralyzed six months ago in a mountain-climbing accident. As a paraplegic confined to a wheelchair, Preston returns to his cabin in the mountains as part of his rehabilitation in dealing with the tragedy of his last climb.

Preston is accompanied by a creepy male nurse named Otis who leaves his crippled patient alone in the house for hours to drive into town. Left on his own, Preston uses a pair of binoculars to check outside where a group of girls arrives at the cabin next door to celebrate an upcoming marriage.

Preston’s spying fuels the most intense and horrific scenes in the film. Preston hears noises and sees a downed phone line, making the lack of cell phone reception even more isolating. When Preston watches one of the girls walk outside to find cell phone reception, he notices movement in the trees behind her. The girl disappears but her cell phone remains behind on the pavement. One of the eeriest shots in the movie is when Preston uses a flashlight with his binoculars to scan the trees and Bigfoot’s eyes appear for the first time.

The best moments of Abominable show Preston as he watches Bigfoot break into the girls’ cabin and kill them one by one. Hampered by his disability, Preston tries to warn the girls, but the relentless Bigfoot is on a mission of mass murder. It’s an intense sequence.

A scene in the bathroom after one girl showers is particularly brutal. Horror scream queen Tiffany Shepis plays the victim. As well done as that practical special effect was, nothing compares to the Bigfoot face-bite to come later. Kudos to the special effects team.

Only one of the five girls, Amanda, survives Bigfoot’s attack. Haley Joel plays Amanda to perfection as the final girl who flees to Preston’s cabin. The most powerful scene in Abominable is when Preston delivers an inspirational speech to the terrified Amanda where he shares the heartbreaking details of his mountain-climbing accident.

“Me too,” Amanda replies.

“That means that we want to live,” Preston says. “I was given a gift that day. And I don’t know why. I mean, it was a miracle that I lived. And I’m going to do everything in my power to make sure that I don’t waste that gift.”

Galvanized by his courage, Amanda starts helping Preston implement his plan to escape the cabin and the rampaging Bigfoot. I especially liked how director Ryan Schifrin incorporated Preston’s use of his mountain-climbing skills to fuel their flight. Of course, their escape is only short-lived, but the final face-off with Bigfoot is intense and satisfying.

Like many horror movies, Abominable features veterans of the genre in small roles. Lance Henriksen (Pumpkinhead, Aliens) makes a brief appearance as a hunter. Henriksen was also in another Bigfoot film I reviewed for The Bigfoot Files, Big Legend. The always solid Dee Wallace (The Howling, Cujo) is a farmer’s wife under attack by Bigfoot in a chilling opening scene.

Other actors of note in Abominable include the late great Paul Gleason as the sheriff. You may remember him as disciplinarian/assistant principal Richard Vernon in 1985’s The Breakfast Club. Phil Morris, who played Kramer’s lawyer Jackie Chiles on Seinfeld for three seasons, is a sheriff’s deputy.

The Bigfoot itself in Abominable is suitably savage enough to deliver the goods and passes the quality test of this Bigfoot enthusiast.

Abominable is a low-budget film that originally aired on SyFy back when it was still called SCI FI Channel. However, thanks to McCoy’s stellar performance, wicked special effects, and superb soundtrack, Abominable stands the test of time as a good old-fashioned Saturday night popcorn fright flick.

Oddly enough, Bigfoot was not the original creature that author Jeff Strand had in mind for his Bram Stoker Award-nominated horror novel Dweller. 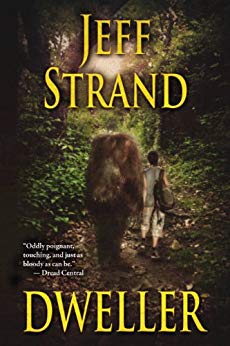 “The concept of ‘the story of a lifetime friendship between a boy and a monster’ came to me before the actual monster,” said Strand in an exclusive interview for The Bigfoot Files. “I’d originally thought it would be a reptilian creature that lived at the bottom of a well. But that was too limiting for a book that covered sixty years, and I wanted the readers to fall in love with Owen, so I switched to Bigfoot. Well, something like Bigfoot. There’s a scene where they watch the Patterson-Gimlin film and try to figure out if Owen is the same type of animal. That gave me the whole forest to play around in and made the monster much more cuddly.”

Of course, since Dweller is a horror novel, Owen the Bigfoot is not as cuddly as Strand would have you believe.

Released in 2010, Dweller is a tragic tale of friendship between one lonely human named Toby and one lonely cryptid that Toby names Owen. What makes Dweller a cut and a slash above the average creature feature is that the novel chronicles a heartfelt relationship between human and beast over a period of six decades, starting with their first encounter in 1953.

Dweller is quite a remarkable feat of storytelling because of the time frame, but also because Strand’s tale is as tender as it is terrifying. Eight-year-old Toby initially encounters the creature (who he later names Owen) in the woods behind his home, but their friendship doesn’t begin until seven years later when Toby is a bullied, socially awkward teenager. Their ensuing encounters spark a relationship that Strand is able to ground in reality.

To me, one of the most poignant aspects of Dweller is why Toby chooses the name Owen for the Bigfoot creature. Strand writes:

“Owen – the human Owen – was the closest Toby had ever come to having a real friend.”

Toby had met a boy named Owen in sixth grade, and for about three months they played together every day until an incident ended their friendship. So, Toby has no friends now. How sad is it that the boy turns to a monster just to have a friend and then names it after the only human friend he ever had?

Owen’s story is even sadder as illustrated in the prologue of Dweller. A runt offspring, Owen is orphaned after watching humans kill his family. Owen runs from the killer humans, and Strand writes:

“When he stopped running, he wept.”

That last line of the prologue always gets to me. Can you imagine a young Bigfoot weeping — not crying, but weeping — after humans kill his family? It’s a heartbreaking moment.

One of the more interesting techniques employed in Dweller is Strand’s use of chapters titled “Glimpses,” which cover years of time in the lives of Toby and Owen in just a few pages. For example, in Chapter Eleven, Strand chronicles 1964 to 1972 in eight pages by describing a moment or two during each year. The glimpses are a surprisingly effective way to show time passing and to develop the characters.

One of my favorite glimpses in the book is when Toby is showing photographs from the iconic Patterson-Gimlin Bigfoot film to Owen. Toby thinks that Bigfoot shares a resemblance to Owen, but Owen disagrees. It’s such a “real” moment.

Dweller is among my top ten favorite novels of any genre, not just horror. I became an instant fan of Strand after reading it and have followed his eclectic career ever since. Known as a master of blending horror and comedy, Strand has written more than forty books, but Dweller remains my favorite (and probably always will). Strangely, his one mainstream romantic comedy Kumquat is my second favorite of his novels followed by the devastatingly dark Pressure. 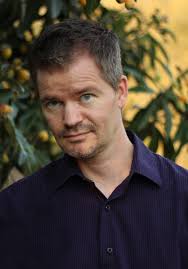 I asked Strand if he believes in Bigfoot.

“I think the overwhelming majority of Bigfoot sightings are hoaxes or just mistakes,” Strand replied. “When I see a shaky video of an indistinct blur viewed through thick forest and the cameraman is saying, ‘That’s Bigfoot! Oh my God, that’s Bigfoot!’ I have to be skeptical. It’s easy to see what you want to see, and it’s easy to fool people, so I believe that very few Bigfoot sightings are legitimate. But ‘overwhelming majority’ doesn’t mean ‘all.’ As with aliens, I don’t believe or disbelieve either way — I’m open to the possibility. But I have not seen anything to make me say, ‘Yes! They exist!’”

I also asked Strand why he thinks Bigfoot continues to remain so prevalent in pop culture today.

“It’s just a fascinating idea, that there’s a creature living out there that may or may not be real,” Strand explained. “It’s mysterious and a little scary. Bigfoot is credible enough that you don’t have to be a complete whack-nut to think, ‘Well, maybe ….’ There’s way freakier stuff living in the oceans. So, he could be out there, and yet nobody has ever caught one or provided conclusive evidence that they exist. Even if you’re a hardcore skeptic, it’s a fun mystery.”

THE BIGFOOT FILES | Chapter One: The Idea of Bigfoot