Steven Rose Jr. writes horror and dark fantasy, including an anthology called  The Fool’s Illusion.  For Horror Addicts Guide To Life  Steven wrote  two articles in the book entitled Horror And Dark Fantasy and Tomb Toons and Kid’s Horror. In his essays Steven gets into the differences between horror and dark fantasy and gives us a history of horror aimed at children. To read Steven’s work, along with several other articles on living the horror lifestyle, pick up a copy of Horror Addicts Guide To Life. Recently Steven was nice enough to tell us what he likes about horror:

Ever since I was a little kid (4 or 5) I’ve loved that sense of mystery and the unusual that the darkness and grotesqueness of much horror conveys. Because I like the unusual, I like the supernatural monsters and alien/mutant creatures of horror; a lot of sci fi, especially in film, overlaps with the horror genre.

One of my favorite all-time classic horror movies is The Shining, a movie that is so chilling that I was not able to watch it all the way through until several years into my 20s. I love the classic Universal monster movies, especially the Frankenstein and Wolfman films. When it comes to Dracula, however, I just can’t get into Bela Lugosi’s enactment of the vampire (although I’ve liked a lot of the other horror characters he’s played, especially the mad scientist ones). I like Christopher Lee’s enactment of Dracula in the British Hammer films much more. Lee portrays the vampire a lot more realistically, in my opinion. (Lugosi comes across as over-acting the part.) When it comes to contemporary horror films, I have not really seen a lot of newer horror films that I really like. A couple that I were really good and are post-2000 are Universal’s remake of the Wolfman and the Alien prequel, Prometheus. I thought they did a great job giving a gothic ambience to the Wolfman re-make and Prometheus gave interesting background to the earlier Alien movies without info-dumping (a term us fiction writers use that refers to background information in a story where it’s not needed).
Favorite books: I like Edgar Allen Poe’s stories, especially “The Fall of the House of Usher” and “The Pit and the Pendulum”; I like Lovecraft’s The Call of Cthulhu; The Manitou by Graham Masterton; Joe Hill’s 20th Century Ghosts; the list is nearly infinite especially since there’s so many horror short stories that I really like because I’m a big lover of the short story in general (that’s what I normally write, as far as fiction goes.) But my favorite classic novels of horror are Frankenstein and Dracula, not only because they star monster characters who have been most iconic in modern horror but also because it conveys so much meaning on a literary level.
Television: I haven’t really been a big fan of horror television, although I’ve liked many of the dark supernatural episodes of the original Twilight Zone, such as one about a living ventriloquist puppet that torments its owner and another about the ghosts of murdered Jews who come back to haunt their Nazi oppressor. I like television horror-hosted movie shows such as Elvira’s Movie Macbre of the ‘80s, Sven Goolie’s show and Mr. Lobo’s Cinema Insomnia of today and the 1970s’ Creature Features hosted by Bob Wilkins in which this last one I grew up with. Horror- hosted movie shows such as these often feature B-rated flicks that are so horrible they’re good which I like right up there with the, believe it or not, A-grade or big budget horror films. I like the pop culture of the eras many B movies grew out of and reflect, especially the 1950s through ‘70s.

Another television show that I’ve always liked, although it’s not supernatural horror, is the original Outer Limits. 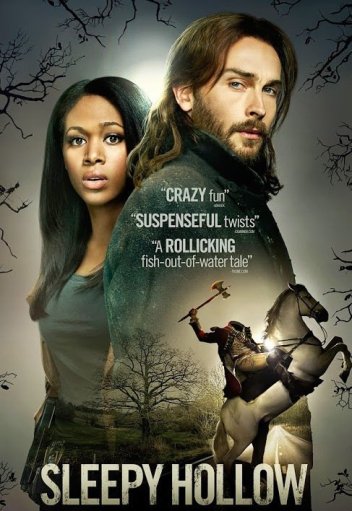 Many of the episodes were dark, featuring menacing monsters from other planets or from mad science experiments. And even though I’ve only seen a couple episodes since it debated about two years ago, I thought Sleepy Hollow was pretty good. Even though it’s way off course from Washington Irving’s short novel, The Legend of Sleepy Hollow, as a TV show and so within itself it’s been made really good and utilizes the Biblical apocalyptic theme well during this trending time of post-apocalyptic zombie themes (even though Sleepy Hollow isn’t a zombie series like Walking Dead is, in which this second one I was never able to get into by the way.)

I wear horror fandom tees, such as ones with Cthulhu prints, skull images, Universal Monster tees. I wear a ‘70s long-hair style and a full beard, which most people seem to be scared of the ‘70s. [laughs] I collect horror memorabilia, especially skull figurines, and use Halloween items I’ve bought on clearance for year-round interior decorating. For example, I have a “painting” of a figure that metamorphosizes from an 18th century naval captain to a dead pirate captain that was manufactured as a Halloween decoration but I hang it in my living room year-round. I don’t dust off the cobwebs in most places in my house. I’m fascinated with crows since they’re so much like ravens and so I’ll take extra effort to avoid hitting them while driving on the road no matter how much an angry driver in back of me is blaring his/her horn or yelling curses to me for “holding up” traffic. I call our local countryside coyotes “little wolves” or “mini wolves”, and I’ll stand several minutes outside at night admiring the full moon. For me, rain and thunder storms are beautiful weather (especially in fall and winter). Also Halloween is like an autumn version of Christmas to me, and so is my ancestral Day of the Dead which for me the two don’t contradict each other. Other words in my Lexington of horror that I use in everyday settings: I call my apartment maintenance man and the cemetery groundskeepers “caretakers”; I don’t call the underground level of a house a “basement”, I say “cellar”; I’ll say “coffin”, not “casket”; I’ll say “grave-“ or “tombstone”, not monument; and I never call a cemetery/graveyard a “monument park”.

My sense of humor tends to be pretty dark too. I listen to pop music by horror-inspired bands, especially the Groovy Ghoulies (who are no longer together) and the Phantom Jets, both who are local to my home area of Sacramento. But a few of my favorite horror rock songs by more notable artists are Michael Jackson’s “Thriller”, Warren Zevon’s “Werewolves of London”, the Rocky Horror Picture Show’s “Time Warp” and, of course, Bobby Boris Pickett’s classic “Monster Mash” which was probably my very first rock song I really got into.

I was working on a second book of short fiction which I originally planned to release in August of this year but it looks like it won’t happen that soon. That’s because I’m trying to submit some stories to some magazines and, because many literary magazines don’t want simultaneous submissions, I would have to write up some new stories for the book. I plan to title it The Hidden. However, if my short story submissions don’t follow through, then the book release may not be delayed for too long (hopefully no later than the fall, ideally in time for Halloween).

My book of short fiction, The Fool’s Illusion, is available on Amazon in both print and e-format (Kindle) [http://www.amazon.com/Fools-Illusion-Steven-Rose-Jr/dp/1491092548/ref=sr_1_1?s=books&ie=UTF8&qid=1431652461&sr=1-1&keywords=the+fools+illusion]. You can sometimes find sample stories of my book at my blog, A Far Out Fantastic Site (faroutfantastic.blogspot.com) as well as ones I have not yet compiled in a collection. Not all of my stories in Fool’s Illusion and on my blog are necessarily horror but most are dark to some degree. I also have a sci fi “column” at the news site, Examiner.com.  [http://www.examiner.com/scifi-in-sacramento/steven-rose-jr ] My Twitter page is @StaRosep2, The Fool’s Illusion Facebook page is [https://www.facebook.com/TheFoolsIllusion?ref=hl] (you may have to be logged into Facebook to see it), or you can email me at strosejr@gmail.com. 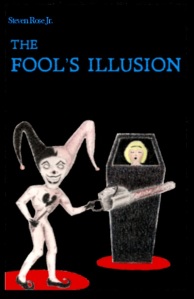 There are a lot of illusions in our lives. Books, movies television and advertisements all ask us to believe in something that is not necessarily true. Sometimes they say the illusion is real. While other times media is just asking us to suspend our disbelief. If we believe in an illusion we are a fool.  For example we might think people who believed in ancient mythology are fools. Some people who don’t believe in bigfoot might call people who believe in him, fools. There are also times that we create our own illusions like when we dream and wake up thinking the dream was real.

Another  example of a fool believing an illusion is when you see a magician sawing a women in half. It might look like the woman is really being cut in two, but its a magician’s trick. One person may know its an illusion but another may believe it. Illusions are all around us, even what we think is reality may really be an illusion.

Figuring out the difference between illusion and reality can make for great storytelling. This is the main theme in The Fool’s Illusion by Steven Rose Jr. This anthology begins with a great non fiction piece on what illusions are, which was well written and really set the mood for the following stories. I really liked Steven’s observations on how sometimes we think something will make us happy and in reality they don’t and how we deceive ourselves with drugs or television to escape everyday life. In the intro Steven points out that everything is an illusion and its up to us how we interpret it.

I thought all the stories in this collection were good but there were five that really stood out. The first one was The Inheritance. This was a horror story about a man who inherits the family estate and  has to deal with the curse that comes with it. He is warned to ignore the sounds coming from the cellar but curiosity gets the best of him and he finds the reason why college students around town are dropping like flies. This story mixes humor and horror with a great protagonist.

Another story I liked was Coming Out. Puberty is a rough period in your life and its even worse when you have a second one and become a different thing all together. I really enjoyed the relationship between the young boy and girl in this one and watching him figure out what he truly was. I would love to see this one expanded into a novel.

I also enjoyed Digital Love At First Sight which is about how one person manages to fall in love with someone who is a billboard model and not a real person. There is  a good theme here about how you can’t have love without pain. My favorite in this anthology was the futuristic Planet Of The Dead which is about a murder mystery on a cemetery planet. I’ve never read a story that combines Science Fiction and gothic horror but this one manages to do it.

Another one not to be overlooked is The Bazaar which takes a humorous look at mass consumerism.The Fool’s Illusion has a little something for everyone.  I enjoyed the concept behind this anthology and look forward to seeing more fiction and non-fiction by Steven Rose Jr.

| the company of wolves || manga | the national psychic academy |