Jeff Carlson recently revealed that his books The Frozen Sky and Teh Frozen Sky 2: Betrayed have been re-released with new covers by Jasper Schreurs. Also Frozen Sky 2 is now available as an audio book: http://www.audible.com/pd/Sci-Fi-Fantasy/Frozen-Sky-2-Betrayed-Audiobook/B00NJ1K3U4/. Jeff is currently hard at work on Frozen Sky 3. To find out more about him go to: http://www.jverse.com/

Something is alive inside Jupiter’s ice moon Europa.
Robot probes find an ancient tunnel beneath the surface,
its walls carved with strange hieroglyphics. Led by
elite engineer Alexis Vonderach, a team of scientists
descends into the dark… where they confront a
savage race older than mankind…

Based on the award-winning short story,
The Frozen Sky is a new full-length sci fi thriller novel.

A quake in the ice nearly kills Alexis Vonderach, setting off new confrontations with the blind alien tribes of Europa. In the weeks since First Contact, her crew has learned their bizarre language… but the sunfish are as violent as their world…

Betrayed is a 200 page sequel to The Frozen Sky by the international bestselling author of Plague Year. 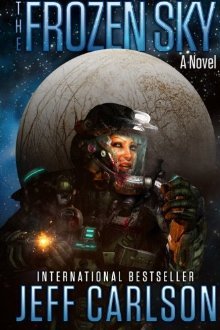 Not often do you come across a novel that blends action, horror, science fiction, philosophy and politics but Jeff Carlson’s  The Frozen Sky does it masterfully.  The Frozen Sky was originally released as a novella but has now been expanded into a full novel which adds  more characters, more action and  more depth to the original story. Set in the distant future the governments of earth have sent several space probes to explore the galaxy and they have found that Europa may have simple life forms and other materials that can be used back home.

A group of archaeologists led by Alexis Vonderach are exploring Jupiter’s moon and the governments of the world are waiting to see what they will uncover.  The crew finds more than they bargained for when they find  hieroglyphs and other proof of life.  Europa is indeed inhabited and the natives don’t like visitors.

The story begins with Alexis running for her life through frozen ravines and canyons of rock while being chased by creatures that resemble  starfish. To make matters worse, her spacesuit has an artificial intelligence program that is malfunctioning and it has its own plans for handling the situation. Alexis is left with the decision to destroy the creatures that are pursuing her or communicate with them and hope they understand her. Help is on the way as other Earth ships arrive on Europa, but what are their plans for Europa’s inhabitants?  Are the starfish type creatures more advanced then they seem and do they want to destroy us for invading their home?

There is a lot going on  in The Frozen Sky and the story works on a lot of different levels. Science Fiction fans get a great description of life on Europa including how the creatures survive, how they communicate and how they changed through the years and you learn how humans advanced through the centuries. It works as an action novel as you hear about the battle between Earth and Europa. It works as a horror novel as the creatures have Alexis on the run with nowhere to go and the story gets philosophical as the humans debate whether they are doing the right thing on Europa. The Frozen Sky  also works as a political thriller as it gets into how the governments make deals with each other for what they want out of Europa and how the humans on Europa try to talk them out of it.

You could tell Jeff Carlson did his homework on the recent findings about Europa and did a lot of research on what Europa is like. I loved how this alien world was described. I also liked how the aliens were presented in the story. At first you see them as monsters but you start to learn about the conditions that they live in and how it shaped what they are, you also discover that they are much more than they seem.

Another thing I like is how the mecha works to explore Europa and how the AI works to its own advantage. My favorite part was learning how Europa’s inhabitants evolved and seeing  how they go from monsters to sympathetic creatures. You also see how the humans can become monsters and even in the future they’re dealing with a lot of the same issues that we deal with now. The Frozen Sky has something for everyone and is a great read no matter what genre of book that you like. 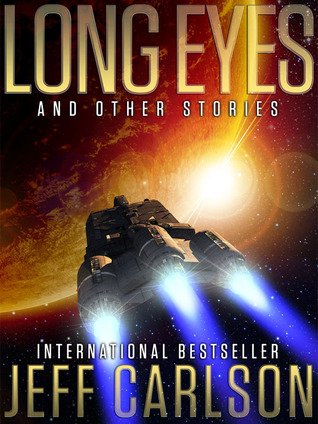 A vampire dog, a human spaceship hybrid and a half fish, half human. These are some of the things that you will read about in Jeff Carlson’s short story collection called Long Eyes. This anthology according to the author is the book no one wanted him to publish except his fans. Long Eyes includes all of Jeff Carlson’s short stories from when he first started writing to the present day.

Included in this collection are three stories that fans of the horror addicts podcast will be very familiar with. One is the story Monsters which was heard in episode 20 and won Jeff Carlson the best in blood listener’s choice award for season 1. Also included is Caninus which was heard in episode  27. Another story in this collection is Pattern Masters which was one of my favorite stories and was featured in horror addicts episode 51.

I have to admit even though I enjoyed all of Jeff Carlson’s stories on Horror Addicts I was a little apprehensive of reading Long Eyes. I do like science fiction but I find a lot of it goes over my head and I thought that might be the case with the stories in this anthology. Not only was every story excellent but none of them left me feeling confused as to what was going on. Long Eyes is very well written and shows how a great science fiction anthology should be.

One theme I found that seems to run through all of the stories here is loneliness. There is usually one character in each story that doesn’t fit in with what is considered normal. A good example of that is in the title story Long Eyes. Which tells the tale of a woman named Clara who is physically connected to a space ship. Clara has been traveling through space for 600 years before landing on a planet and being attacked by humanoid creatures.  Clara sees the potential in these humanoids and has to decide whether to help the creatures become more then they are or put in a distress call in to help her leave the planet.

This story was the first selection and really set the mood for the whole book, I loved the idea in this story about a lonely being  comes across a race of people that are worse off then she is, and deciding if she should help those around her or do what is best for herself. Another story that has a similar theme is Planet of the Sealies. This one follows a woman named Joanna searching a planet in the distant future in search of dna to find out how past civilizations lived. This story was another one of my favorites and once again has a character that doesn’t fit in with anyone else.  I also loved finding out what a sealie is.

Long Eyes has something that will appeal to horror and science fiction fans alike. There is also a little mystery, fantasy and comedy thrown in as well. In addition to the stories I also liked the commentary that Jeff Carlson gives at the end of each story, it was kind of like getting a director’s commentary for each story. My only problem with the anthology was that I thought almost every story in this anthology would make a great novel and I wanted more. I guess that is the point of a good anthology though, to make your fans want more.

If your looking for more from Jeff Carlson then another title to check out is The Frozen Sky. This novella  is about the first manned mission to Europa. A group of archaeologists are exploring Jupiter’s moon and the governments of the world are waiting to see what materials from Europa can be used back on Earth.  The crew finds more then they bargained for when they find some hieroglyphs and other signs of life.  Europa is indeed inhabited and the natives don’t like visitors.

The story is mostly told from one of the crew member’s point of view; a 36 year old woman named Alexis who the rest of the characters see as being childish. Alexis has to run for her life through frozen ravines and canyons of rock while being chased by creatures that resemble  starfish. To make matters worse her spacesuit has a mind of its own and has its own plan for handling the situation.

There is a lot going on in a short period of time in The Frozen Sky. A lot of the story is told through flashback as the crew fights for their lives, the back story unfolds and you learn why the mission is taking place, what is at stake and what the crew hopes to get out of the trip. I liked how Jeff Carlson started the story in the middle of the action and then back tracked to tell how we got to where we are. I think if the story was told from the beginning it wouldn’t have worked as well.

You could tell Jeff Carlson did his homework and did a lot of research on what Europa was like. I loved how this alien world was described. I also enjoyed watching Alexis wrestle with the question of how she will escape the creatures or is it possible to communicate with them without causing them harm. Another good thing was how the aliens were presented in the story, at first you see them as monsters but you start to learn about the conditions that they live in and how that shaped what they are. Europa is a harsh environment to live in and there is another surprise in the story that makes the moon’s inhabitants lives even harder.

This novella will probably best be enjoyed by hard core science fiction readers. It has a  good mix of science and politics set in the 22nd century and quite a bit of action as well.  The Frozen Sky was a really fun read that can be enjoyed on many levels and it really gets you thinking on what may be living on Europa.