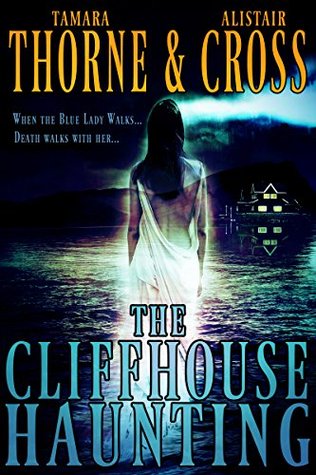 The Cliffhouse Lodge has a history dating back to 1887. Not only has it been a place to stay for people enjoying the beauty of Blue Lady Lake, but it was also a place with a dark history. In the twenties a serial killer called the Bodice Ripper terrorized the town and a ghost called The Blue Lady was seen when a death was about to occur.

Flash forward to the present and a new serial killer is terrorizing the town and the Blue Lady is making her presence known again. At the Cliffhouse Lodge, wet foot prints are being spotted in rooms, disembodied voices are being heard and when people look in the mirror they see the face of the Blue Lady.

What can I say about The Cliffhouse Haunting by Tamara Thorne and Alistair Cross other than it left me with a huge smile on my face. I’ve been a fan of Tamara Thorne going back to the mid nineties. I like her writing because her books have great characters and she creates a detailed mythology. Also her stories have just the right amount of horror, smut, and humor that I look for in a book.

The Cliffhouse Haunting is no exception, it was obvious that Alistair Cross and Tamara Thorne had a lot of fun writing this and it was hard to put down. I would love to know the writing process behind this book because all the characters are so detailed and a lot of them reminded me of people I knew. I’m not sure who wrote what in this book but by the end of it I was wanting to read any solo work that Alistair Cross has out along with re-reading Tamara’s books.

The best part of The Cliffhouse Haunting is without a doubt the characters. The serial killer referred to as Hammerhead who hates everyone including the ghost who helps him is a perfect villain. We also have characters who are self-centered and egotistical but at the same time are fascinating because we’ve all met people like this. Authoress Constance Welling thinks she is God’s gift to the world but no one else seems to like her. I kept hoping that nothing bad would happen to her in the book because the scenes that she is in were so entertaining. There is one scene when she is doing a fortune-telling act that’s one of the funniest and most outrageous scenes I’ve ever read in a book. Another great character is Dr. Siechert who will want to make you stay away from doctors for the rest of your life and is part of a very funny scene which takes place in a supermarket.

In addition to memorable characters in this book I also loved the detailed history of the Cliffhouse lodge and how the mystery of the Blue Lady unfolds. I loves how The Cliffhouse Haunting goes back and forth from being funny to scary and it was hard to predict where the story would go next. There are some gruesome death scenes in this book and one in particular had me laughing and cringing at the same time. All I’m going to say about it is beware of the chocolate wanderer. You want to know what it is? You need to read the book; you won’t be disappointed.

Another book I read recently was a novella by Paul Di Filippo and Claudio Chillemi called The Horror at Ganico Rosso. Set in the early 1900’s, this story tells the tale of retired detective named Joe who gets called back to work to solve a series of murders that’s related to a case that he worked on years ago. The murders are linked to the mummies of the Capuchin Catacombs and they may hint at a threat that is coming to earth from another dimension.

The Horror At Gancio Rosso is a short but entertaining read that is inspired by the works of H..P. Lovecraft. This story includes monsters, mummies,parallel dimensions and occult happenings.It also has a good mystery with intriguing characters in an eerie setting. The book had a pulp fiction type feel to it, the story is simple, entertaining and throws a lot of strange creatures and villains at you in a short period of time which is all a true horror fan can ask for. All in all this book is a lot of fun and reminded me of the type of stories that I’ve enjoyed in Weird Tales magazine and it’s a must read if You are a fan of Lovecraft.

If you’re into works of strange fiction set in a futuristic world filled with violence and terror then you should check out Alessandro Manzetti’s Massacre Of The Mermaids. This book contains six stories in a futuristic Rome ruled by a She-Pope. Some of the items you will see in this book include women who get fishtails sewed on them and then are brutally tortured as part of a new religion, human landfills, a slaughterhouse prison and much more. This book is not for the faint of heart but it’s interesting to see how some of the subjects talked about in this book mirror some of the things we have in the present day.

This is a hard book to talk about, the stories were confusing to me but the imagery in each story was so good I wanted to keep reading. The way things are described here are dark and disturbing and the stories are so off the wall that I had to keep reading to find out where each one would go next. Alessandro Manzetti describes things like no other author has and Massacre Of The Mermaids shows how much of a work of art bizarre fiction can be. This book may be ultra-violent but the settings described give a great idea of how creative a horror story can be and it would be interesting to see a novel set in the world that Manzetti has created here.

From the Bram Stoker Awards® nominee Alessandro Manzetti comes a new horror, weird, gory, and dystopian short story collection. “The Massacre of the Mermaids” includes seven visionary and disturbing stories set in the future and the past: the apocalyptic and bloody Rome dominated by the first She-Pope who organizes shocking exhibitions in the new Coliseum; the bloody and cannibalistic Jerusalem during the First Crusade with gangs of rapists, criminals, and anthropophagy addicts; the future ultra-violent district Paris Sud 5 with a human landfill; the Nakara, a slaughterhouse-prison dug into the bowels of the moon, the first organized human breeding in history, managed by the diabolic Slicer; and the subterranean rooms of Mictlan, the Aztec hell that destroys Spanish victims, sacrificing them through unthinkable and brutal rites. “The Massacre of the Mermaids” will leave you breathless. The limit has never been so violated.