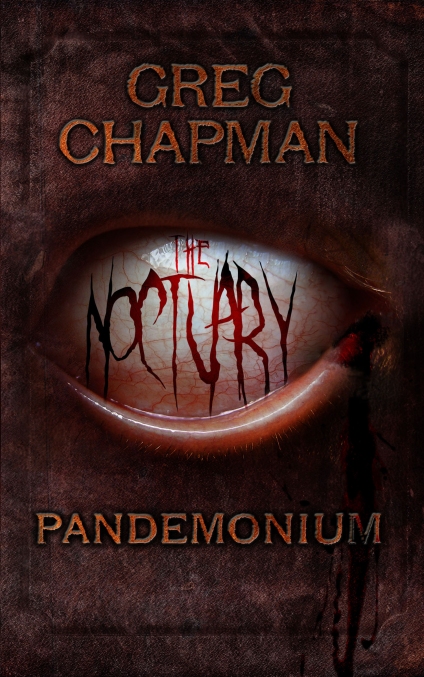 Simon Ryan was a talented writer, he had a hard life and the dark muses in the underworld want to use him as a scribe. Now he writes words that aren’t his own and every horrifying sentence he writes comes to life in the real world. With his new power, he is given the chance to rewrite his dark past but some things can’t be changed and Simon goes missing.

A few years later, Psychiatrist, Dr. Desmond Carter finds a bloody manuscript from his former patient Simon, who he thought was dead. This sets off a chain reaction of events as the police are called along with Simon’s former agent Christina. Desmond finds out that if you write the manuscript in blood, what you write will come true, but at what cost? Now everything Desmond knew about himself and Simon is making him question his sanity and could lead to his damnation.

The Noctuary Pandemonium by Greg Chapman is an unapologetic horror novel. In the beginning, Greg describes the night as a shade of blood with people walking the street being stalked by their shadows. This is being described by someone who fears to lose his mind and he may be right. If this picture of darkness that Greg Chapman paints doesn’t sell you then this line will: “There is no finer art than the prose that terrifies! Fear is Primal!” With those words you know you are in for a gruesome read and the book doesn’t disappoint.

I love the concept here of muses from the underworld looking for someone to inspire darkness and destruction in humanity. What makes it interesting is how the people the muse chooses start to do it because they want to fix a problem. Good intentions don’t always lead to good results though and the chosen ones have to deal with the darkness that has always been inside them. The most interesting aspect to The Noctuary is that the spirits of the underworld aren’t really the bad guys, read it and you’ll understand.

There is a point in this novel where I had a lot of unanswered questions but all loose ends are tied up by the end. I loved the history behind the muses and how Hell is described almost as a living place. This book also gets into the idea of how what lies in the soul of man can be much darker than Hell and there is no escaping it. This book paints a bloody disturbing portrait that you will love if you’re a horror fan. The Noctuary Pandemonium is a dark thrill ride that will have you thinking harder about the consequences of every choice you make.