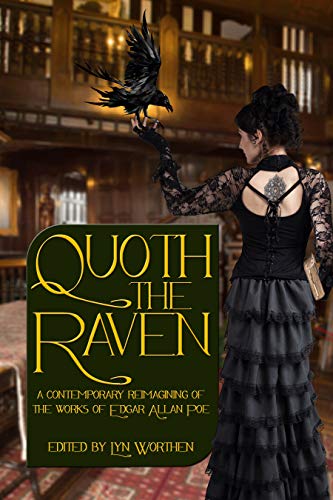 Kristin Battestella aka Kbatz (and a special feline guest) discusses new appreciations in revisiting the short fiction of Edgar Allan Poe including The Fall of the House of Usher and The Tell Tale Heart in addition to comparing and contrasting the Vincent Price and Roger Corman Poe Film Adaptations.

Thank you for being part of Horror Addicts.net and enjoying our video, podcast, and media coverage!

Horror Addicts.net – By Addicts, for Addicts!

THE ANGELS MAY HAVE NAMED HER LENORE – BUT LOVE CALLS HER… REVENGE.
The “Lost Lenore” is lost NO MORE! NOT FOR THE FAINT HEARTED. ADULT CONTENT. BLOOD, BETRAYAL.. AND MAJOR BOOBAGE!
Illustrated and re-worked by The Voice Of Horror and Queen Of The Pumpkin Patch, Venus de Vilo.
Read the legendary Edgar Allan Poe poem complete with stunning and interpretive illustrations (reminiscent of Edward Gorey and Tim Burton) that delve deep into the maelstrom of madness and the macabre of who exactly the characters in the poem may be.
Re-told as a revenge fuelled tragic and shocking love story gone horrifically WRONG. WHO is Lenore?? WHO is the narrator?? And WHO! WHO! Is the Raven??
38 pages. A5 size, fully illustrated and ENTIRELY hand drawn and printed – this is a gothic tribute to die for!
The buy link for the hard copy of the book – also available as a PDF download – https://venusdevilo.bandcamp.com/merch/the-raven-by-edgar-allan-poe-illustrated-re-told-by-venus-de-vilo-physical-copy

Answer ONE of these questions (that has not already been answered)
in the comments and be entered to win a Poe Prize Pack from HorrorAddicts.net.

Comment below to be entered into the drawing for a Poe Prize Pack from HorrorAddicts.net.

May 11th-13th / H.P. Lovecraft Film Festival and Cthulhu Con / Portland, Oregon /
Some of the activities at the con include a reading by Jenna M. Pitman and
showings of Edgar Allen Poe’s The Raven along with The Whisperer in the Darkness
and The Haunted Palace. The event also includes panel discussions, vendors and
prizes for the best independent horror films. For more information go to: hplfilmfestival.com

Friday May 18th / Billings Zombie Prom and Walk / Billings, Montana / This undead
celebration includes a zombie walk around downtown Billings followed by a prom.
Make up artists will be on hand to turn people into zombies and there will be a
jello heart and brain eating contest along with a horror basket silent auction.
Special guests will include: Timothy Patrick Quill from Army of Darkness, Alex
Vincent from Child’s Play and Robert Jayne from Tremors. For more information go to: zombiesofmontana.com/events.html