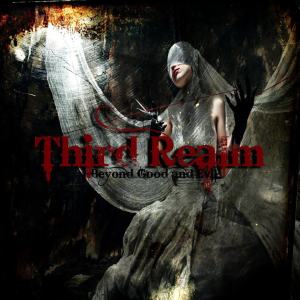 Our featured band this episode is Third Realm, which is the project of Nathan Reiner of Buffalo, NY, who shared with us the song “Pallor Mortis”. When Third Realm plays live, Nathan is joined by Melanie Beitel on keyboards, John Fitzgibbon on guitars, and Mike Reiner on drums. As Nathan puts it, “Each of them bring their own unique element, we mix together experimental and traditional approaches. It’s been a good experience performing and moving forward with this current lineup. It’s definitely difficult to box my music into a few genres because I have been known to bounce all over the place. For the sake of convenience, I am currently labeling my music as Dark Wave / Electro / Industrial. This gives listeners a general idea of what to expect but in no way guarantees a strict dedication to those genres.”

“Pallor Mortis” has a very “horror-oriented vibe”, as Nathan put it. “The actual meaning of course represents a stage of death. For me, in relation to creating a song, it is sort of a fantasy. I imagine myself coming face to face with several hallucinations and challenges I must overcome in order to advance in life after death.”

He waxes just as poetic when he explained the band name. “Third Realm represents a belief that we are all observing a hologram projected from a parallel universe. There is somewhat of a science fiction attachment to it, although scientists are starting to admit this theory could be true. For some reason, I associated this belief with a specific realm, the Third Realm. I created this idea several years before ever recording a song but decided to stick with it once the name started to gain recognition.”

The band is based out of Buffalo, NY.  Nathan told me, “I grew up here, but I often find myself missing Aspen, Colorado. I lived out there for awhile, it was a great experience to step outside of the limitations of being trapped in one town. In terms of location influencing my music, absolutely not. I’ve never adapted the mannerisms of the people living in any city, it’s interesting to come across individuals that are a cliché representation of where they grew up. There is nothing particularly wrong with it, as long as you maintain an open mind. I just don’t like when people start to lose their inner self.”

So far, they have only played in Western New York. However, he added, “I would love to play in Germany, a couple of international shows are currently in the works. There has been an overwhelming amount of positive reactions to the music, especially internationally. It’s very humbling, it certainly inspires me to keep creating. I think there is something that happens at every show that stands out, be it negative or positive. Whether it be a sound guy that is outside smoking when the stage monitors are completely blasting or not on at all, people mocking you because you are playing a different style of music than the other bands that night, or people legitimately enjoying your set. Every show is a learning experience especially when you step outside of your comfort zone.”

It may be hard to choose, but which of your songs or albums is your favorite? “It is certainly hard to choose for a couple of reasons. One, I am rather modest and two, I am self critical of everything I do. The tracks that hold the most emotion are the ones I find myself listening to. ‘Suicide Note’, ‘Romantic Death’, ‘Delusional Ecstasy’, ‘Pallor Mortis’ and ‘Love is the Devil’ would make the list. This is not to say I don’t enjoy my other songs, these are just the ones that have the most personal attachment.”

What was the inspiration for creating your latest project? “With my latest album, Beyond Good and Evil, I wanted to accomplish a couple of things. First, it was a chance to expand musically and spiritually. I spent more time on the songwriting and wanted to make sure I was creating something that I was personally attached to, and not just create something with a cool beat, bass line, etc. I think it’s possible to accomplish both, yet so many songs are coming out (mainly from mainstream pop ‘artists’) that sound cool, but have little meaning. In fact, they don’t even sound cool, but rather cheesy. Next, I wanted to blend together elements from all my albums. If you listen to all of my albums, I think you’ll notice the collaboration of styles coming to life on the new one.”

Who are your favorite bands, and who has influenced your music? “Peter Murphy, Nine Inch Nails, Nick Cave, Covenant, IAMX, Diary of Dreams. My favorite bands happen to be the ones that influence me the most as well. I am always creating, so when I respect a band and find myself really enjoying them, it’s partly because I hear elements within their music that I would like to implement into my own. I could see myself starting a Black Metal / Thrash band. I started experimenting with music about 16 years ago. My main initial focus was on piano, synthesizers and sampling. I just recently started dedicating more time into learning guitar.

Do you have any other creative outlets? “Music is my only real creative outlet. When I’m not doing that, I could be seen at other concerts, occasionally at an Industrial club, maybe even doing the basics such as karaoke, video games and reading, because after all, it still exists.”

Do you listen to podcasts? “I do. I’m currently digging the Oonztcast by COMA Music Magazine, Gothic Paradise Club Radio Top 10 & The Requiem.

What’s next for you and the band? “To pursue a bigger label and slowly put together a new album. There are probably going to be some bigger shows in the works as well.”

Finally, do you have any advice for new bands? “I would say, be original. Music has exploded into so many sub-genres that you really don’t hear much anymore that you haven’t heard before. With that being said, I’d also say put genuine emotion into your creations, that will give you a unique voice, a trademark of sorts.”