Music Review:  Slashing Through the Snow by Venus De Vilo 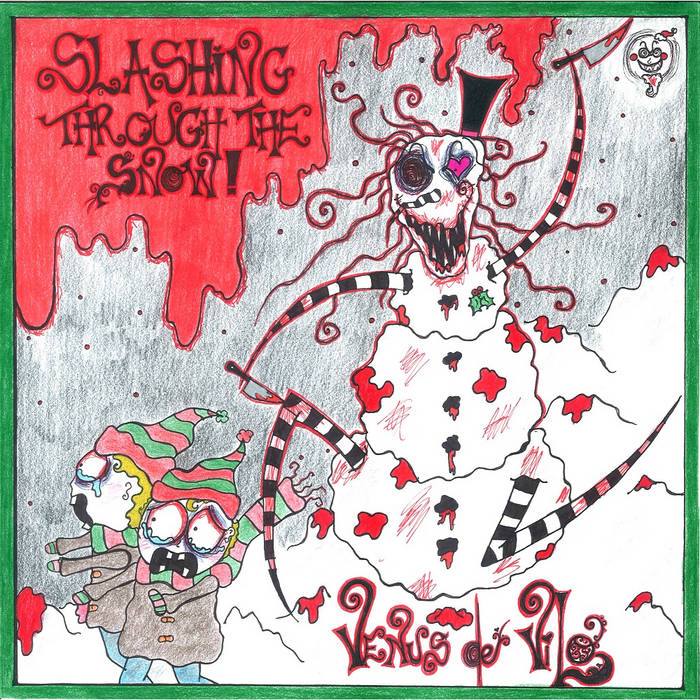 Venus de Vilo’s Slashing Through the Snow is a three-song monsterpiece that should appeal to fans of Gothic singer/songwriter/cartoonist Voltaire, whose sinister snark makes him De Vilo’s twin when it comes to tuneage. The Dublin native plays her own instruments accompanying a voice that’s a bit like Lydia Lunch meets Jello Biafra with Nick Cave lurking somewhere in the shadows.

The only problem with this release is that it’s three songs. One of the many upsides is that the songs–“Santa’s Slay,” “Mistletoetag” and “The Night Before Christmassacre”–are such deliriously wrong and madly delicious ear candy they will burrow into your brain folds faster than a maggot on the Swedish biker crank.

De Vilo has been described as “the love child of Marilyn Manson and Amanda Palmer,” and the blurb is dead on, if the greying matter on display here is any bloody indication. I would add Edward Gorey and Tim Burton, among other artists who combine dark wit with horrific themes; one is reminded that H.P. Lovecraft’s first published story, “Herbert West, Reanimator,” was intended to be funny and appeared in a humor magazine (Little Known Fact Department).

If you ever wondered about the predatory character of Santa Claus, “Santa’s Slay” will set the record straight. Anybody who spends Christmas night breaking and entering into the homes of complete strangers with a “naughty and nice children” list pasted against his jelly belly should by all rights be listed on some kind of international Most Wanted list. Not to mention that Claus had done this once(?) a year for centuries before he began to sport the Coca-Cola corporate colors, and we have a big, bad, red and white problem on our hands.

De Vilo’s version strikes me as the more accurate–in her take on the legend, Santa takes a sharp weapon along with his gifts. And why not? Why stop at home invasion and stalking kids when you can add serial killer to your credits?

Preparatory to “The Night Before Christmassacre,” “Mistletoetag” tells the grisly yet hauntingly beautiful story of a bad romance. And then we have the sizzling giblets of the thing…

Santa’s slayride sets the stage for the unholy blessings of “Christmassacre,” where everything dreadful lurking beneath this beloved holiday worms to the surface and takes heads. Eerie keyboards echoing Keith Emerson’s score for Dario Argento’s film Inferno lead into the secret history of Yuletide. Yup, folks, “fresh from his spree,” it’s “f**king Saint Nick!” His hair soaked in gore, looking like Leatherface merrily dolled up in seasonal department store drag, the better to sit you on his lap and ask what you really want for Xmas…

De Vilo spares no institution, person, place or thing with her caustic, hilarious songs. If you’re easily offended, this download is probably not for you. But if you like brilliantly funny, razor sharp songwriting, Slashing Through the Snow is well worth the Euro.

Just a taste of De Vilo’s lyrical gifts, from “Mistletoetag”:

A mince pie for one and a bottle of wine,
This time last year, he was all mine,
under mistletoe, in our paper hats,
Now all that he wears,
A MISTLETOETAG…

For more information, go to: https://venusdevilo.bandcamp.com/album/slashing-through-the-snow-album-comic-book-and-killendar-2016

THE ANGELS MAY HAVE NAMED HER LENORE – BUT LOVE CALLS HER… REVENGE.
The “Lost Lenore” is lost NO MORE! NOT FOR THE FAINT HEARTED. ADULT CONTENT. BLOOD, BETRAYAL.. AND MAJOR BOOBAGE!
Illustrated and re-worked by The Voice Of Horror and Queen Of The Pumpkin Patch, Venus de Vilo.
Read the legendary Edgar Allan Poe poem complete with stunning and interpretive illustrations (reminiscent of Edward Gorey and Tim Burton) that delve deep into the maelstrom of madness and the macabre of who exactly the characters in the poem may be.
Re-told as a revenge fuelled tragic and shocking love story gone horrifically WRONG. WHO is Lenore?? WHO is the narrator?? And WHO! WHO! Is the Raven??
38 pages. A5 size, fully illustrated and ENTIRELY hand drawn and printed – this is a gothic tribute to die for!
The buy link for the hard copy of the book – also available as a PDF download – https://venusdevilo.bandcamp.com/merch/the-raven-by-edgar-allan-poe-illustrated-re-told-by-venus-de-vilo-physical-copy

I don’t consider myself to be a big music person but every once in a while I come across a musician that grabs my attention. Venus De Vilo is an artist that grabbed my attention. Venus is a rare bread, it’s not often that you find music that combines horror and comedy and can easily fits into genres such as goth rock, metal, acoustic rock and punk rock,  but her music does just that.

Venus De Vilo was described as the love child of Marilyn Manson and Amanda Palmer by the Goth Alternative magazine The Bite. She has also been described as The Voice Of Horror and Queen Of The Pumpkin Patch. She lives in Dublin Ireland and performs ghoulish themed weird concerts in metal bars, rock bars, and in cabaret and burlesque shows.

Venus’s first EP was released on Halloween 2012 and called Edgar Allen Ho. It included songs such as The Heartless Horseman and Miss Frankenstein and was well received by fans of horror and dark music. Her next release was Til Death Do Us Part in 2013.This one had a good mix of hard rocking songs that you could dance to and acoustic versions of the same songs with creepy lyrics to boot.

Venus De Vilo’s latest EP came out earlier this year and is called Handle With Scare. When I first heard this EP it put a huge smile on my face. I enjoy music that has a rawness to it but also has a passion to it and its obvious Venus De Vilo puts a lot of passion into her work. Handle With Scare has a psychobilly sound to it with a great acoustic guitar work and awesome lyrics. Listening to it, I thought that the lyrics must have been hard to record. Venus has a great voice and easily hits high notes and can sing in a low voice as well. All three of Venus De Vilo’s EPs are available on Sound Cloud and are well worth your time. My thoughts on each track on Handle With Scare are listed below:

acoustic guitar work, The music is heavy with no electric guitars and some great vocal work.

2. Absinthe Makes The Heart Grow Fonder: This one sounds like it would be hard to sing live but I’m sure Venus can pull it off. I have to describe this as a love song with a bizarre twist.

3. BubbleGlum! Venus shows she has a great sense of humor in this song. I love the lyric “Misery loves bubbleglum.”

4. Dead! Dead! Dead! Great vocal work in this song and the music made me thing a little of mariachi surf music if that makes sense. I can see this as a good dance song.

5. The Dead Don’t Dance. This is a slower song with great singing.I love the harmonies in it.

6. Personal Satan. I think this is the best one on Handle With Scare. I love the clapping in the song, this would be a great live track.

In the future Venus De Vilo plans on releasing a full length album, a book of poetry called Creepy Like Sunday Mourning and she also has a comic out based on Edgar Allen Poe’s The Raven. To find out more about her check out these links: