Despite some of the famous names involved, these household horrors and haunting dames are good, bad, and ugly…

House Hunting – A low priced, seventy-acre foreclosure is too good to be true for two families in this 2013 mind-bender starring Marc Singer (The Beastmaster). Rather than a scenic credits montage, the obligatory drive to the horrors is a claustrophobic car conversation between a young wife and the unheard step-daughter. Shrewd editing places the divided family each in their own frame, and our second trio also argue over a teen son on crutches and a grumpy dad rightfully asking what the catch is on this dream property with automated sales pitches in every room. Surprise accidents, hidden guns, tongues cut out, crazy people on the road, and disappearing figures in the woods pack seven different characters into the SUV, but all the country drives lead back to this house. What choice do they have but to stay inside by the ready fireplace? Flashlights, hooded shadows in the corners, just enough canned food for all – the families stick together in one room but cigarette smoking, hooting owls outside, and chills in the air add tense while a bloody ax and a straight razor foreshadow worse. The men take watches but one woman wants to get to work on Monday while the other is almost happy to be there and clean the house. Can they wait for help to arrive? Instead of any transition, the screen simply moves to “One Month Later” with piled cans, smelly clothes, and nobody sleeping. Household papers reveal those responsible for the foreclosure are closer than they think, but they’re trapped in this routine, strained by violent visions and hazy apparitions. Is it really ghosts or cabin fever? If one family stays, will the house let the others leave? Finger-pointing, blame, and distrust mount amid suicides and new assaults. Of course, the metaphors on being trapped by one’s own consequences and reliving past mistakes aren’t super deep and the atmosphere falls apart in real-world logic. Why does no one do what the real estate recordings say? Have they no pen or paper to recount events? Why don’t they hunt for more food? This is a little weird with some trite points, unexplained red herrings, and an unclear frame – problems from a lone writer/director with no secondary eye to see the personal family connections through without changing the rules for the finale. Fortunately, the supernatural elements aren’t flashy, in your face shocks, and the plain fade-ins mirror the monotony, freeing the eerie to develop with meta jigsaw puzzles, doppelgangers, us versus them threats, injuries, and standoffs. Are they getting what they deserve? Will the house let them apologize and escape? The clues are there, but selfish bitterness and vengeance prevent one and all from seeing the answers. While slow for those expecting a formulaic slasher, this festival find remains unusual and thought provoking.  I Didn’t Think it was *that* Bad

Cold Creek Manor – New York skylines, business flights, morning rushes, and scary accidents lead to a perilous country renovation for Dennis Quaid (Innerspace), Sharon Stone (Basic Instinct), Kristen Stewart (Twilight), Stephen Dorff (Blade), Juliette Lewis (Strange Days), and Christopher Plummer (Somewhere in Time) in this 2003 thriller from director Mike Figgis (Stormy Monday). The prologue, drive to the scares, and less than friendly redneck rest stops are just a few of the usual horror staples for our pretty rich white city folk. However, there is a high-end style with a great brick manor, overgrown charm, and unusual slaughter tools amid the spiderwebs, children’s clothes left behind, vintage family portraits, and saucy Polaroids. Older cell phones and flip cameras feel more rural than dated, and overhead camera angles, closeup shots, in and out of focus usage, slow zooms, and pans in the stairwell add chills. Intercut conversations also build community tension with chats in a booth versus whispers at the bar revealing the small town connections as uncouth relatives insist there are no hard feelings over the foreclosure sale. The trailer park naughty, shirtless handyman steamy, and mano y mano contests, however, are weak try hards alongside several unnecessary characters compromising what should be taut isolation. Snakes – and I do mean snakes for those terrified of them – nursing home nasty old men, skull bashing and devil’s throat dialogue, and tavern violence accent the backwoods car chases, animals in peril, and buried evidence as storms approach. Rather than in your face hectic loudness, the most frightening scenes here are the quiet chills, but of course, nobody pays attention to the son who’s holding all the information needed and being upfront about the real estate deal would have saved everyone a lot of trouble. The evasive camera and poor editing are used to distract from confusing logistics, and drinking or affairs contrivances are planted to deflect from the wealthy people claiming they have no resources to leave before the weak rooftop standoff. This tries to be sophisticated and had the pieces to be better but fails in putting together a steamy, fatal, cerebral thriller. Ironically this derivative is better than the recent trite scares shilled out, and if you go in expecting the standard house horrors, this can still be bemusing.  But Skip

House of Bones – The 1951 baseball nostalgia opening this 2010 ghost hunters yarn starring Charisma Carpenter (Buffy) is totally The Sandlot complete with a chubby redhead hitting dad’s Babe Ruth autographed baseball over the ominous fence. Technicalities drag the arrivals as dude bros in a van with the latest gear are sure to announce themselves as the cameraman, the host, and the producer. Slow-motion strobe and in your face television credits for the internal paranormal program parody such series while playing into all they do with annoying crescendos, false jumps, and cheesy bumpers. Every horror moment has to be a bad effect – a glance at gross apple worms has to be some herky-jerky strobe when exploring the cluttered old house, skulls behind the plaster, roaches, suspicious ectoplasm, and disappearing assistants better build the eerie atmosphere. Black and white camera screens, creepy radios, and EVPs accent the attic artifacts and bloody toes yet the modern filming is too fast with no time for the haunted house mood or psychic sensations. The unlikable crew remain jerks trying to turn throwing up hair, shadows caught on camera, disturbing phone calls, and impaled police into a reality show angle rather than taking the danger seriously. Trying to be both a debunking paranormal show and a horror movie at the same time doesn’t quite succeed when the out of place humor and handheld camera sarcasm jar with the scary glass mishaps and arms coming through the walls. The television production asinine should have been dropped sooner so all can fear this alive house that feeds on blood and plays psychological tricks with vintage visuals, power outages, mirror images, and gear hazards. However, the find the blueprints plan of action is silly – an overly serious and contrived resolution meandering with a thin script and useless psychic before running out of steam. While fine for a late night millennial audience, this ultimately has very little haunted house merit.  And Avoid 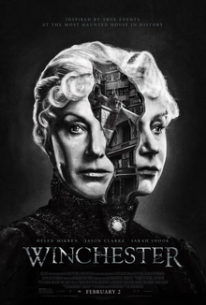 Winchester – Hammering sounds, lantern light, staircases, tolling bells, and dark corridors accent this 2018 tale of the famed mystery mansion starring Helen Mirren (The Tempest) as Sarah Winchester. Period patinas, maze-like designs, carriages, and cluttered libraries add mood, however creepy kid warnings and opium stupors contribute to an unnecessary opening twenty minutes. The Winchester company lawyer wants a doctor to assess the titular widow’s state of mind – an unwelcoming, typical start with men hiring other men to outwit a woman in a superfluous modern script that does everything but focus on the eponymous subject. Jump scares and crescendos compromise subtle winds and ghostly movements, and the bright picture and special effects editing feel too contemporary. One and all talk about the construction oddities, spiritualism, and the reclusive Widow Winchester’s grief, but it’s too much telling instead of seeing her unreliability and the potentially paranormal. Eerie sounds from the call pipe system are an excuse for ill-advised exploring, dreams, and more disjointed flashes. Quiet overhead scene transitions and meandering tours of the house have no room to create atmosphere because there must be a back and forth mirror fake out – it’s a bathroom scare at the ye olde washstand! One can tell this was written and directed by men, for even as a trio there are no checks or balance on how to tell a women’s horror story. We don’t know her internal or external torment over this spiritual construction as the creepy veils, automatic writing, and supernaturally received architectural plans are too few and far between, and the audience remains at arms length through the keyhole rather than inside with the ghostly connections. Why isn’t the possessed kid with the potato sack on his head who’s jumping off the roof and shooting at the old lady removed from the house? Why should the spirits leave her family alone when the Mrs. begs them to when the script hasn’t given them or us any reason to listen to her? The backward perspective here puts viewers in a skeptical, debunking mindset, leaving the picture with something to prove and audiences looking for the fright around the corner – creating predictable haunts rather than period simmer. Though capable of a one-woman show, Mirren is a mere MacGuffin as old newspapers, flashback splices, and physical bullets bring down one disgruntled ghost as if that’s supposed to stop the silly whooshes, earthquake rattling, and exaggerated construction destruction. Maybe the ghostly shocks and turn of the century accents are fine for a spooky midnight movie. However, the historically diverging and problematic constructs here shift a unique, one of a kind women’s story in an amazing setting into a pedestrian, nonsensical copycat horror movie about a man facing his own ghosts. Good grief.

Okay, Okay, how many times have we seen this destination and thought, blah whatever? Yes, I know. So, a little more than a decade ago, when I was still young I went to the mansion. I boarded a flight to California and stayed there for a week.

I visited a lot of fun places but this one was supposed to be the best. We all know the story, but a little background: The mansion was continuously under construction 24hrs to appease spirits. Sarah Winchester, owner and widow of THE Winchester maker of guns, loved séances. Who didn’t in her time? It was what all the cool kids were doing! In the séance, Sarah was advised to build and keep building in order to appease the spirits of those murdered by her husband’s guns.

Rooms that lead to nowhere, walls, and even holes in floors, this was guaranteed to be creepy and fun! So, I woke up early the day I was to visit, and went on the tour with anticipation. I didn’t feel anything. I felt like all people around were not of the undead variety. I thought, okay after the tour. I will experience something.

After the tour, I walked around the grounds in hopes to run into gardeners of the past, or even scary spirits. Alas, I was not so lucky. Sad and terrible vacation. I didn’t experience anything and I wanted to! I think I scared all the spirits away because I wanted so much to see or experience something…. maybe next time if I find myself in the area again.

Have you been to the Winchester Mansion? How was your experience? I would love to hear about it!