January is zombie month here at horroraddicts.net the problem with that is, I am not big of a zombie fan. I know. I know, but stay with me for a second I can explain. See what had happened was…lol

But seriously all jokes aside anyone who follows my reviews here or Horror Addicts or my blog knows that when it comes to horror, I am not easy to please and my chief complaint about the zombie genre is that there seems to be just one or two stories being told over and over again. And on top of that I am not a gore hound.

But I would be lying if I said I never enjoyed a Zombie movie. So in the spirit of the month here are my top 15 zombie movies, that not only were original enough to pique my interest, but that I actually enjoyed.

If you’re a hard core zombie fan you’ve probably already seen all of these, but if you not a zombiephile or haven’t seen a few of the movies listed below, hopefully your enjoy them as much as I did. Ok, let’s count them down to one.

Yep, Fido. This movie is over the top in slap stick, I was laughing my ass off. This movie worked for me is because even though the jokes are raunchy, it’s basically a boy and his dog movie that the whole family can enjoy, just like Cujo.

This is an amazing dark little tale of revenge and the Sheriff’s son who was kidnapped 10 years ago returns as the spear head of the mayhem that ensues.

The vector for this virus are the airwaves and it rapidly spread through the speakers of the radio. This movie stressed me out, the tension in the film is taught and doesn’t let up. I knew something bad was going to happen but I still didn’t look away. I couldn’t.

This movie made me cry at the end. The original zombie at the beginning of the film are the rats, but quickly spreads to the human population. Unlike most zombie movies where the entire world collapses, the power goes out and the water is contaminated moments after a bite, officials were able to contain the outbreak from escaping the city. Even during the 1st stages of the outbreak people were still going about their daily business. It took a while before everyone started barricading themselves. New York is huge but this entire story revolves around a single family.

Mutants follows all the rules of the plotline of the oversaturated plotline that plagues the genre (get it … plagues the genre…lol) with one powerful deviation. A married couple who’s expecting a baby is desperately trying to get to the safety of the army base. But along the way the husband gets bit. His transformation from man to monster is slow, which switches the focus from the zombies outside to the incredibly brutal conflict this man is having within himself. This woman loves her husband and the choices she makes are equally heart wrenching.

I hate remakes. So I was really, really reluctant to watch this movie and because of that I almost missed out on a gem. Again it follows all the rules all the way up until what you think is the end.

This was the very 1st movie I watched by George Romero and what 1st impressed me was the forcefulness of the US Army, but then enters onto the screen Colonel Peckem. This was the very 1st black man that I had seen in a horror film that wasn’t the token, sacrificial lamb, that always dies first and that was just the cherry on top of an already kick ass horror movie.

The pacing and cinematography of this movie are off the rails! I could go on and on about how awesome I thought this movie was but I’m not. And just like The Crazies circa 1968 the casting of a black female lead who was extremely significant to the storyline sent me over the moon!

Two words: Idris Elba! lol j/k This movie stayed on my best sequels list for years … until I saw The Descent Part 2

What I loved most about this movie is how it makes you feel claustrophobic on a wide open plain, and on top of that, there isn’t a horde of the undead trying to relentlessly claw through every little crevice. This is movie rests square on the shoulders of psychological horror.

This is another excellent psychological horror movie. This team was sent to Guard Post 506 because there hadn’t been any communication from them for days. When they get there the only thing they find are blood smeared walls. Everyone is gone. Except for one person…

This frightening little zombie story is told through the POV of dogs and the ending is absolutely insane! It was perfect.

I cannot believe that this short was only a finalist at Australia’s 2013 Tropfest. A finalist. Really?!

This movie has been on my top ten best list every single year since I 1st saw it. The virus in the movie is being transmitted through the TV, your cell phone and radio. I’m not sure if this is can technology be considered because no one dies from the virus directly but everyone who’s been inflect go on a killer spree, so I think it might be close enough. Though this movie runs continuously it was written by three different writers and its one hell of a ride. If you haven’t seen it yet I hope that you will. 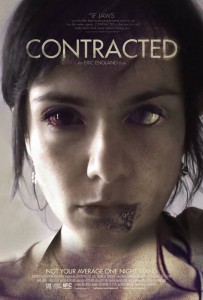 I want to throw in a couple of honorable mentions before we get to #1 on the list. These aren’t zombie movies but there zombie-ish enough to add to this list 1st up

After a breakup, she goes to a party, has too many drinks and ends up having unprotected sex in the back of some guy’s car. She starts to feel a bit off the very next morning and thinks she may have caught a sexually transmitted disease. She didn’t but by the end of the movie whatever the she did catch turns her into a zombie-like creature. What really bothered me about this movie is how unbelievably how incredibly selfish her friends and family were. This woman lugging around all kinds of emotional baggage and was in the early stages of recovery. She needed support from those around her, but no one could be bothered unless getting something from her. The things that she went through were beyond terrifying. Made worse by the people she needed most.

The undead in this movie have been awaked by a necromancer, not a virus, but that didn’t stop it from being a kick ass flick.

I don’t not have the mental capacity to understand why, when lists are being compiled in regards to the most disturbing films ever made this title is absent from the majority of those catalogs. DeadGirl is by far one of them most unsettling movies that I have ever seen.

This movie destroyed me. Absolutely destroyed me. I even watched it again before I started writing this and I was such a blubbering mess, that I had to go take a nap, lol. This is a movie that I immediately connected with and it’s a story that I find myself thinking about out of the blue. The mere idea of a zombie is terrifying on its own, and then to have a 13 year old girl out there wandering around on her own. And my vivid imagination doesn’t help.

Before I let you go, and in spirit of Zombie month, I am gonna take this opportunity for a little shameless self-promotion. I too, have a Zombie story to tell. And you can download it free, along with the rest of the stories included in my horror anthology …And They All Lived Happily Ever After! I know…shameless =D Have a good one guys!

Washington State native Crystal Connor has been terrorizing readers since before Jr. high School and loves anything to do with monsters, bad guys, rogue scientific experiments, jewelry, sky-high high heel shoes & unreasonably priced hang bags. She is also considering changing her professional title to ‘dramatization specialist’ because it’s so much more theatrical than being just a mere drama queen. Crystal’s latest projects can be found both on her blog and Facebook fan page at: 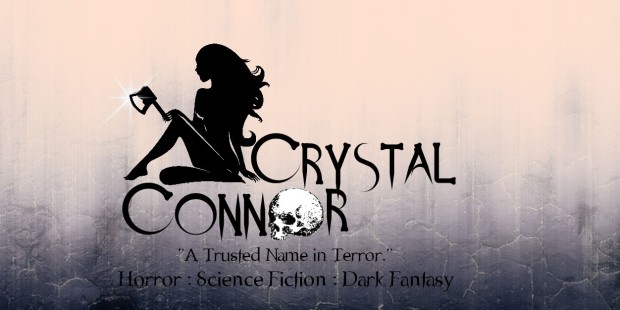