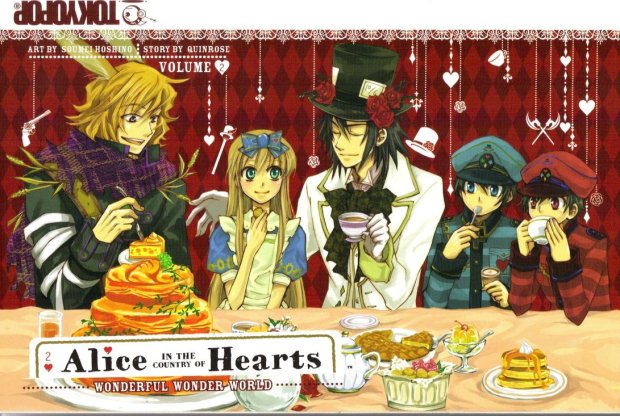 “These aren’t rabbit ears! They’re just long! I swear I am not a rabbit. I eat carrot cookies, cake, and tea. I like stuff made from carrots but I could never eat a carrot straight, so I’m obviously NOT a rabbit.”

How dare Alice group people together based on the size of their ears! This is just one of the amusing quips in the awesome manga series Alice in the Country of Hearts byQuinrose. This has to be one of my top ten manga series of all time.

The first thing that drew me to these beautiful books was the art. Illustrated by Soumei Hoshino, the detailed display of clocks, sweets, architecture, and fashion is phenomenal.

I think any Alice lover will enjoy the new twists on our most beloved story. First, Alice is not the Alice we know. Instead of being curious and following the white rabbit, he tricks her into falling down the hole and then traps her in wonderland by force-feeding her a potion through a kiss. She finds herself in a land where everyone has a clock for a heart and they are fighting a war based on reincarnation. The characters are so detailed and interesting, I’m not even sure I can pick my favorite one.

Our favorite Mad Hatter in this book is Blood Dupre, a Mafia Don who leads The Hatters in war against the other factions. He is a gothic dandy, more interested in seducing Alice than the battle at hand. In his posse are two young boys dressed in fashionable military outfits and a non-rabbit enforcer named Elliot March. Something this author picked up on from the Lewis Carroll book, that I never thought of, was the possibility of the White Rabbit and the March Hare fighting. I found this storyline beyond amusing.

Another sect of Wonderland is the Amusement Park District where Alice can enjoy all the normal sort of rides while being shuffled around the place by overly peppy park attendants. The owner of the park is Mary Gowland, an older hippie man who takes to drastic mood swings and plays the violin very badly. Gowland and Dupre are in a war because Dupre makes fun of his name, which when said in such a way, sounds like Merry Go Round. The fights between Gowland and Dupre are fun to read. Gowland can turn his violin into a gun and Dupre doesn’t even flinch when his hat gets shot off.

Boris Airay plays the part of the Cheshire cat.  A cosplay kitty boy who loves to get in scrapes. He is often found by Alice, in the woods, sometimes nude, with horrible injuries that heal when he licks them.

The Queen of Hearts is pretty much the same as in the original Alice story so far, not much is known about her yet. The caterpillar is Nightmare, a handsome, eye-patched man dressed in elegant blacks. He mainly just gives more info to Alice, explaining terms the wonderland folk use and adding a sense of foreboding as he hints at dangers unseen.

Two new characters to the Alice tale are perhaps the most interesting to me. Julius Monrey is in charge of the Clock Tower Plaza, a neutral zone in wonderland and the place where all clock hearts are repaired. Ace is a knight from Heart Castle that helps Julius recover the hearts when someone is killed. He seems a double agent, but can’t navigate to save his life. Not too smart, you might think he would fall prey to the Hatters, but he is a pro at sword fighting so that keeps him safe.

Even though this is a manga about the cheery, happy world of wonderland, the author keeps that sinister air about it so that you are just as curious and frightened as Alice. The most chilling part of this retelling is the connection between the shadow people and the servants with no face. I’ll let you unravel that one on your own.