As you all know by now, February isn’t only Black History month, it’s also Women in Horror month. So celebrating black women who write horror is something that happened naturally. And like the great pioneers who paved the way in the American civils rights movement, when honoring the black women who paved the way for those who write now there are certain names you simply cannot mention when speaking about this subject. One of those names of course is Octavia Butler. And while I hope that years down the line I am remembered with the same reverence, it pains me to admit that it wasn’t until the year 2010 that I first read her work.

I had dropped my car off at the shop and was on the bus home when I found a copy of Fledging on the floor in front of me. I picked it up, read the first line completely unaware that this simple act would change my whole writing perspective just six months before I was to be published. But that’s a story that I’ve told time and time again when asked about my experiences as being both a ‘traditionally’ published author vs being a self-published one.

Two years before she died I saw Octavia Butler in person but I didn’t say anything to her. I was so star struck that I just froze, so I just watched from afar as others found the courage to actually approach one of The Great Ones. I drove home kicking myself that I had been such a chicken shit.

Next time I told myself.

But of course there was no next time. What I felt upon learning of her death was shame. I was so ashamed that I did not have the bravery to approach the woman who, without even realizing it, instilled in me the courage to not only write, but then fight to tell the story I wanted to tell and tell it the way I meant for it to be told.

She wasn’t the only one who laid the path on which I now write, there are a lot of women who make up the links in the chain that connects me to Octavia Butler.

In March of 2015 I went to California and shared the spotlight with the amazing best-selling author Sumiko Saulson for our Trilogy of Terror book-singing tour.

The day before our tour kicked off we went to a conference called Astro-Blackness it was a two-day colloquium discussing Afro-futurism through literature, multi-media and film. While there I had the opportunity to meet Nalo Hopkinson, Nnedi Okorafor and Tananarive Due. When Nnedi and Tananarive sat right next to me I almost died! I was so fan girling that I was posting pix and updating my Facebook and Twitter statuses with such fury you would have thought I was advising someone on the New Stock Exchange trading floor.

It was a blast, but the one thing I did do was to tell each and every one of them how reading their work influenced and strengthened my own. I could barely compose my thoughts and everything I said was jumbled when I was speaking with Nnedi Okorafor, because I was so chock-full of emotion. But somehow I got through it.

A few months later in May I went to Atlanta to attend World Horror Con, where I shared a booth with Nicole Kurtz. Having the opportunity to meet Jack Ketchum, Jonathan Maberry, and William F. Nolan the men who wrote the books I read while I was growing up is one of the main reasons I attend fan conventions. And its surreal, awesome but surreal, that there are people that attend fans conventions to see me. But I digress.

Linda D. Addison. She is the first African-American recipient of the Bram Stoker Award, and she had won three of them before I even considered with seriousness becoming a writer.

For me, the most cost effective way to discover a new author, not brand new but just new to me, is by buying anthologies.

One of my staple go-tos used to be the Year’s Best Fantasy and Horror anthology. And that’s how I found out about Addison’s work. The second anthology I read that had one of her stories in it was a collection of stories written by all black writers: Dark Matter: A Century of Speculative Fiction. Even though I didn’t like all the stories it was Dark Matter that launched my search to find other black horror and science fiction writers.

My idol worship of Linda Addison began while I was reading her anthology called: Animated Objects. It wasn’t like any other anthology I had ever read. It has short stories and none of them ‘match’ each other the way you’re used to seeing in anthologies, there’s poems, and even personal notes. The way Animated Objects is put together greatly inspired the way I constructed mine.

I had a plan when I went to World Horror Con on how I was going to approach Linda. I told myself I was going to stand up straight, think about what I wanted to say before I said it, and not make an ass out of myself by acting like a lunatic fan-girl.

Did I do that? No dudes, I didn’t. Of course I didn’t. I was so unprepared. Lol

Ok, see what had had happened was …

I was on the 1st panel of my day talking to a co-panelist as we waited for the all the people to come in. I just happened to look up as she was entering the room. Now, imagine if you will a rock-star writer that you revere is coming to listen to a panel that you are speaking on. I already mess everything up when I have to speak in front of a crowed, which is way I don’t do public readings. Not only was she in the audience she sat right up front.

Dudes, I was so nervous I swear I thought if I opened my mouth I would vomit butterflies. Laugh if you want to, but I’m not kidding. Once the panel got underway I was ok, I messed up, like I always do when speaking in public, but I got through it.

So after the panel was over did I calmly walk over to her and introduce myself in a professional manner?

Went straight into fan girl more and blurted out, ‘OMG, you’re so beautiful can I take a picture with you?’ Sad I know but true. Please see Exhibit A… 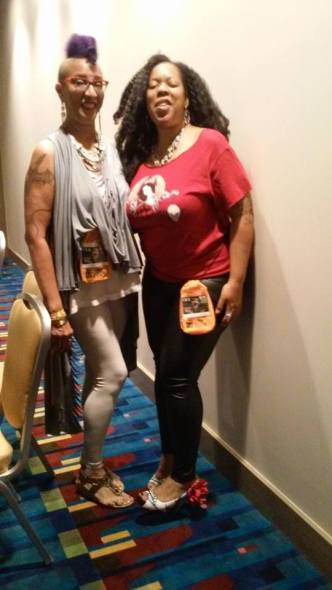 Like my mother, Nalo Hopkinson, Nisi Shawl, Tananarive Due, and Linda D. Addison are Living Legends, high priestess, the elders who have created a space for me to exist.

Last year at Crypticon Seattle I got the chance to meet Ken Foree. And yes I was in full-fledge fan girl mode, especially when I was signing a copy of The Darkness for him. I gave him a huge hug, and then all the joking stopped when he stopped smiling. I was abruptly reminded that I was in the presence of an elder. A Great One.

He held me firmly by the shoulders and said, “We’re fam. And you owe it to me to do good. You owe it to me and to everyone coming up behind you. You hear me? You owe me…”

I couldn’t say anything after that because I basically burst into tears. And he is absolutely right, I owe it to everyone coming up behind me.

And what goes without saying but what still must be said, is that I owe him. I owe him and I owe all of my elders that came before me.

Washington State native Crystal Connor has been terrorizing readers since before Jr. high School and loves anything to do with monsters, bad guys, rogue scientific experiments, jewelry, sky-high high heel shoes & unreasonably priced hang bags. She is also considering changing her professional title to ‘dramatization specialist’ because it’s so much more theatrical than being just a mere drama queen. Crystal’s latest projects can be found both on her blog and Facebook fan page at:

They All Lived Happily Ever After!

One thought on “Living Among Legends”