Phillip T. Stephens writes and rescues cats in Austin, Texas. He publishes several times a week for Medium. He is a  contributing author to our new anthology, Kill Switch

1.)    How old were you when you first discovered horror? 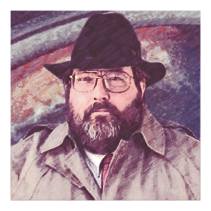 Other than life as a Baptist Preacher’s Kid in general? I don’t remember my exact age, but I remember the event. I was in elementary school, and my father insisted I accompany him to a youth retreat for high school students. The facility was creepy, but the moment of crisis occurred when he showed a movie at midnight (don’t laugh) Abbott and Costello Meet the Mummy. Toward the very end of the movie is a quick shot of the mummy’s bones, which for some reason I can’t explain having watched the movie a dozen times as an adult, scared the living bejeezus out of me. I couldn’t sleep that night.

The next day we went for a hike around the lake. (If you’ve seen Tarkovsky’s Solaris, think of the lake at Kelvin’s parents’ house.) We rounded a bend and I spotted a moss covered stick poking from the water, a stick which, at that moment, I mistook for a human finger.

I couldn’t sleep by myself for months. Instead, I slept on a cot in my sister’s room, which probably contributed more to my adult neuroses than the moments of terror I experienced at the retreat.

Walker Percy, but I suspect you mean horror writer. From a literary standpoint, Peter Straub, but from a writer’s standpoint Steven King. I lived for each new release for several years until The Stand, which became the manual for everything I never wanted to do as a writer. I loved the story, but the prose was atrocious. I continued to read him until It when I couldn’t pick up another book.

This doesn’t change my respect for what he’s accomplished, and I faithfully followed his exploits with Joe Bob Briggs (John Bloom), redneck film reviewer as long as Bloom’s column ran.

3.)    What inspired you to write your piece, “Subroutines?”

I was working with a writing group on the topic “passing through a doorway.”

4.)    How much control do you exert over your characters? Do they have free will?

If I like the direction they’re taking, they’re free to do as they please. If I think they’re interfering with the story, I’ll slap them down in a heartbeat.

I have, but I also write with the TV on.  Looking back, I’d say my biggest influences are Laurie Anderson, David Byrne, and Brian Eno.

I’ve trained myself to take inspiration from scraps of information and passing thoughts. I often riff off (aka rip-off) strands of conversation. But it could be a reflection in a window, an asshole ordering coffee, or something that passes the corner of my eye. 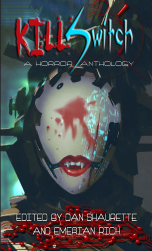 Tarkovsky’s Stalker. Many consider it science fiction, and it is, and others find it tedious, but this movie exemplifies Tarkovsky’s ability to make beauty from debris. The movie explores the premise: what happens when you discover what your heart truly desires?

Twin Peaks. Nobody twists angst into terror better than Lynch.

10.)  What does the future hold for you? What do we have to look forward to?

That depends on the publications to which I submit. My life is in the hand of good editors like you. I’m making the final corrections to the novella version of my #TweetNovel Doublemint Gumshoe which I posted Tweet-by-Tweet for the better part of a year. Think the mob, digital gangs, the tech industry, aliens, nanobots and the dumbest detective who ever lived. We’ll see what happens.