Party songs for the end of the world?

Greetings and Salutations, Horror Addicts. When last we visited, the world was headed into a shelter-in-place that has lasted longer than many folks anticipated. While it’s been a mixed bag of despair and uncertainty, there have been glimmers of hope that I’ve been hanging on to, and of course, music has been there in new and exciting ways to ease my soul. I’ve found tunes for every mood and put together a few playlists that I’ll share some of on my next edition of Ro’s Recs. But this month I had a listen to Justin Symbol’s latest work and I gotta say, it’s pretty damn reflective of our current state of affairs. 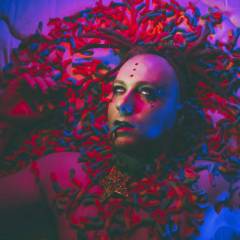 Justin Symbol’s opening track to the new album Candyman, “End Times,” sets listeners into an anarchist’s vibe for the end of the world, which might seem fitting to some right now. Often sounding like a Marilyn Manson of old, Symbol has girls “shaking their tits” in celebration of the apocalypse, and you know what? Why not? What are we supposed to do when it seems as though the sky is falling? Candyman contains some juvenile lyrics that are sprinkled with wit and overlaying horror-inspired effects and beats that sometimes miss their mark. At times the album feels like a promising industrial album with songs like “Prophets of Nothing” and “Lust.” These particular tunes feature engaging guitar tracks and lyrics that come close to being a snarky riff on life. ”Mothra” creates strong imagery with lyrics such as  “blackout the sky,” “sorting out the bodies” and “curl up inside a cocoon of flies,” but as the album continues, Symbol delves into extremely graphic sexual content that some may find offensive. If that’s your kink, you may feel right at home. Symbol straddles the line of rap and rock with interesting verse, intriguing riffs, and creepy atmospheric sounds. “The Devil You Know” was a standout for me. Give the album a listen and see if it’s your jam. You can find Justin Symbol on Spotify and Apple Music.

That’s it for Merrill’s Musings this month. Be sure to check out my next Ro’s Recs, where I will share with you the best songs for surviving the shelter-in-place. Take care, be safe, and Stay Tuned for more Merrill’s Musings…