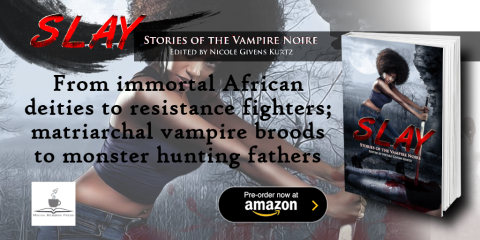 SLAY: Stories of the Vampire Noire is a groundbreaking anthology, featuring stories of black characters, written by black authors. The stories featured have a staggering range, pulling from myths and cultures worldwide.

In “Desiccant” a woman moves into a new apartment, only to discover that a mysterious illness plagues the building, draining the residents dry.

This story is absolutely original. Gidney set the tone for the entire anthology in terms of creativity. From the start, I knew I was in for a revolutionary set of stories that took vampire myth to new heights.

This creative telling of the Infinity Disco fire in 1979 tells the story of a man entranced by a siren, leading him into a grim life of covering up murders.

Thomas weaves infatuation and horror together into a tightly told story that draws you deeper into dread. Her descriptions of Delilah are enchanting and terrifying all in one.

The Retiree by Steven Van Patten

An old man, taken to a retirement home hides a terrible secret from her daughter, something he must do to keep her safe. And he must make one final sacrifice to do it.

Patten’s characters jump off the page from the start. He pulls no punches when it comes to a crotchety old man. His slow reveal of the story made this stand out in an impressive anthology.

The Dance by L. Marie Woods

Gillian finds herself entranced with a woman dancing at a club and is drawn into her spell.

Woods brings blood and sex to the page with “The Dance”. I was absolutely enthralled. Her prose is impressive. The brief glimpse she offers—the story spans mere minutes—is so satisfying.

A Clink of Crystal Glasses Heart by LH Moore

In “A Clink of Crystal”, a group of teen girls is ushered into womanhood, and something more, by their mothers.

Moore steps inside the mind of a teenage girl with ease. She creates a unique and imaginative take on the vampire myth, weaving it with femininity in a way that delighted me. She could easily weave this into a successful novel.

Diary of a Mad Black Vampire by Dicey Grenor

The vampire Ashanti does not get attached to humans until she meets Tetra. As Tetra’s darker desires are revealed, Ashanti becomes more enamored. The ending is a twist to die for.

Grenor creates incredible tension throughout the story. I was filled with dread just reading, knowing something was right, but not sure where everything would go wrong. “Diary of a Mad Black Vampire” is a masterful story.

The Return of the OV by Jeff Carroll

In “The Return of the OV”, an old-school vampire is imprisoned after a heinous murder threatens to expose vampires to mankind.

“The Return of the OV” is clever. That’s really the best way to describe Carroll’s premise and writing. He explores the intricacies of vampire politics in a short format, hinting at a wider world just beyond what we can see.

After her guild of hunters is murdered by a vampiric ex-boyfriend, a woman struggles whether to accept her destiny as a vampire hunter and the grim fate that comes with it.

McCalla introduces a novel’s worth of content in a short story format. She manages to tell a complicated and fascinating story with very little space. Her characters are engaging and her ability to write action is impressive.

In “Gritty Corners”, a young vampire hunts down her sire for revenge, only to find out there’s more to the story of her transformation.

I desperately want to see “Gritty Corners” as a novel or series. Cage introduces a kick-ass female protagonist who can truly hold her own. She left me wanting so much more than what I was given. This was one of my absolute favorite stories in the anthology.

Shadow of Violence by Balogun Ojetade

A woman infiltrates a vampire feeding ground and reveals herself to be far more than they ever expected.

Ojetade writes action like no one else, creating tension without being overly technical. He introduces unfamiliar mythology with ease, weaving it into the story without bogging down the plot.

‘Til Death by Lynette S. Hoag

In ‘Til Death’, a vampire assassin must help a client dispatch his wife when he suspects she’s been turned into a vampire.

The humor and horror in ’Til Death’ work so well together. Hoag creates a larger than life character who could hold her own in a series.

In ‘Encounters’ a woman sees her dead husband twenty years after he should have died.

The revelations to come and the choice she must make kept me on the edge of my seat. Mcentire presents a powerful story of family and love.

When an important vampire finds herself in trouble after feeding from an important human, she’s rescued by a lowly vampire who has important news to tell her… and a favor to ask.

It’s clear that Flynn created a wonderful and complex world that she only hints at in “Unfleamed”. The story is packed with fun references to Dracula and honestly made me laugh with the reveal at the end.

In “Beautiful Monsters”, a vampire combats a corrupt system of oppression against supernatural characters in a small town.

Jeffers presents another story that could easily be expanded into a novel. She pulls more than just vampire lore in for the fun and “Beautiful Monsters” is better for it.

In “Frostbite”, a woman discovers her family’s dark past after she’s turned by a vampire, along with the betrayal that could change the course of her future.

“Frostbite” is a beautiful story. It’s masterfully written, with nuanced characters and a slow reveal of the plot that made me ravenous for more. Again, I want to see a novel adaptation with even more.

In this story of love, community, and hope, ancient lovers reunite to protect their friends and family from old threats in a new age.

The atmosphere of this story is everything. Leakes writes the culture of her characters in a way that few authors can. The setting comes alive and the tension of the story is wonderful.

In “Snake Hill Blues”, Mamma Lucy hunts a vampire that stalks the community of Harlem.

Grant creates a compelling character in Mama Lucy. It’s impossible not to root for her, and even more difficult not to worry as things get hairy. “Snake Hill Blues” was one of my favorite stories in the anthology.

In “Ujima”, a newly turned vampire tries to save her sister and other humans from the vampires that enslave them like cattle.

Hurt creates a horrifying world where vampires rule and humans are merely food. Using a pair of sisters to explore this dynamic makes the story all that more compelling.

When frightening creatures attack the university, turning students into zombies, a lone man must rise as a hero to fight them.

The voice of Ekpeki is incredible. The story was both frightening and hilarious. I enjoyed the overly confident nature of the narrator.

His Destroyer by Samantha Bryant

“His Destroyer” retells of the story of the Passover from the point of view of the angel of Death, a woman compelled by insatiable hunger to feed on the first-born Egyptians.

Bryant created a unique and literary story that was a delight to read. The grief of the woman at her actions is palpable.

“Quadrille” tells the story of misfit monsters that find a home and family together.

Dance writes in an innovative style. His characters are compelling and the way he weaves the scientific information about vampires’ abilities doesn’t drag down the action.

In “Asi’s Horror and Delight”, a witch attempts to trick a god by offering a legendary vampiric bird shapeshifter as a lover.

Saulson brings various myths into play in this story. She kept me in suspense about the intentions of the characters and their ultimate fates until the very end.

In this story, a vampire follows generations of his former lover’s descendants, unable to let go of her memory.

Crist created a love story with vampire trappings. She wove in themes of obsession and love while also exploring what it means to live forever.

In “Rampage”, a vampire hunter must make a monstrous sacrifice to hunt a vampiric elephant and the creature that created it.

Riley’s story is innovative. She takes the typical vampire myth from an unusual perspective, all while creating a compelling narrative.

In “No God but Hunger”, two companions hunt a leopard, only to find that they’re being hunted by something far worse.

Samson creates a world where humans have been driven from civilization by a greater threat. The return to basics is a wonderful twist on the dystopian genre.

In a world ruled by a theocratic government, vampires are tightly watched. They are never to feed on people. When Telisa is introduced to human blood, it causes a drastic transformation and puts her on the run from the authorities.

Davis blends old vampire mythologies with new science to write a story that sings. The twists are unexpected, but satisfying.

Message in a Vessel by V.G. Harrison

In “Message in a Vessel”, a vampire plague has ravaged the world and the remaining vampires are running out of food. The humans have been enslaved, but their numbers are dwindling. In search of more, a space ship is being sent out.

The characters are vivid and the horror of the world is sinister, though it lurks under a clinical veneer. I loved this story. It was a piece of sci-fi mastery and I hope that Harrison creates so much more based on this premise.

In “Blood Saviors” an investigator for the Vampire Council discovers a horrific experimental lab where fae are used to create beauty products for humans. She works to free the prisoners, but must also find a way to save her brother from the disease ravaging her community.

Berger’s world is immersive, pulling us into the tension of the story right away. The conflicting goals of the protagonist make the story all the more real. I liked that Berger didn’t hold back when building this story.

Overall, SLAY: Stories of the Vampire Noire was a compelling read. Each story presented something new. Old and new themes of vampires were explored in great detail. The authors should all be proud of what they created.

One thought on “Book Review: SLAY: Stories of the Vampire Noire”