We may think all the young adult fantasy books, Potter-esque films, and shows like Charmed have cornered the magic market onscreen, but classics like 1958’s Bell Book and Candle have kept the kooky comedy and witchy situations innocent and fun all along.

Based upon the play by John Van Druten (Gaslight, Cabaret), director Richard Quine (Sunny Side of the Street) and screenwriter Daniel Taradash (From Here to Eternity) craft a charming look at the power and hijinks of magic and love. We often allude to love being like a bewitching spell in lyrics and poetry. Even though a spell is cast in Bell Book and Candle, we’re never quite sure where the magic ends and the true love begins. The fanciful and fun take on possible love from socially at odds groups-humans and witches-is lighthearted and still enjoyable today. We can make all the modern and hefty allusions we want about mixed romances or stereotypes about practitioners of witchcraft, but it’s nice to just take in a sweet movie with none of those pretenses. There are a few lighting effects, camera tricks, and the proverbial smoke and mirrors, but more than anything Bell Book and Candle allows its players the time and space to show the magical fun.

Yes, Jimmy Stewart (Harvey, It’s A Wonderful Life, Mr. Smith Goes to Washington, Rear Window, Anatomy of a Murder, need I go on?) is a little too old to be a leading man here against Kim Novak, but he’s still delightful as the straight man publisher caught in the magical mix of spells and romance. We believe a charming witch could get Shep all flustered, confused, and tongue-tied due to Stewart’s loveable slip-ups. His mix of enchantment and clueless nonsense when confronted with the world of witchcraft must have been great fun then-as it still is now to the modern viewer. Stewart’s old, and perhaps his performance is a bit Capra-esque old fashioned, but it’s a fun turn nonetheless. As wonderfully fooled as Shep is, Jack Lemmon’s Nicky is wickedly slick. His magic is all in good fun, too, but he can’t resist the spotlight. Nicky’s ill-attempted exposé writing collaborations mix the crazy ambition with the sardonic blend of wit and drama contemporary audiences expect from the late star of Grumpy Old Men and The Odd Couple. In a way, there is a touch of passing the torch between the graying Stewart and energetic Lemmon. Both men handled the romance, seriousness, and comedy of their roles before and after Bell Book and Candle with a style and class not often found in today’s young acting crowd.

Though not as famous as her male counterparts, its fun to see Kim Novak paired with Jimmy Stewart again after Alfred Hitchcock’s suspense filled Vertigo the same year. Novak’s good witch longing for love does take some getting used to after her deceptive dame in Vertigo, but her husky voice and dynamite eyes adhere to the femme and witchy vibe we expect. Her costumes are hip, with mostly spooky black or eye-catching reds- but what’s with the high, almost white hair? There’s not many close ups of Novak for some reason, but the ones we’re given are breathtaking. Fun effects and cat motifs add to Gil’s already enchanting ways, too. We believe her when she says she has the power to get things done, yet we feel for her wishes for normalcy. Likewise, Elsa Lanchester’s (The Private Life of Henry VIII, Bride of Frankenstein, Witness for the Prosecution) Aunt Queenie is great fun as the elder, kooky and mischievous sprite helping with some good natured interference and match making. Comedy maven Ernie Kovacs (Our Man in Havana, North to Alaska) is also a delight as author Sidney Redlitch – an ‘expert’ of modern witches among us who fails to see the warlocks right under his nose.

Part of Bell Book and Candle’s charm is its fun fifties color and style: the cigarettes, quirky music, Oscar nominated high-end fashion and nonchalant, cute effects. The high life of mid century New York is a delightful time capsule, and the pillow talk approach to witchcraft is in a way modern but no less sweet. However, part of this charm also irrevocably dates the portrayal. It’s 1958- the innocence of the post war years would soon be lost. Some of the whirlwind two-week romance is a little too innocent with no innuendo before the quick marriage talk, and even the colorful styles and titled fedoras would be on the fashion outs in a few years’ time. It’s as if the onscreen attitudes and styles are a final fifties hurrah before the turmoil and realizations of the sixties. 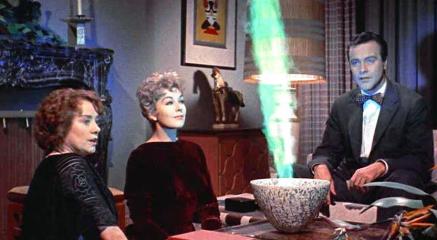 Now I’m sorry to say that I don’t know anything about current Wiccan and religious practices; but naturally modern pagans and witches looking for some seriousness and accuracy won’t find it in Bell Book and Candle. While not deliberately offensive, the clean cut fifties stylings goes for the traditional broomstick stereotypes. It’s great if you like films with some witchy fun, but there’s no realistic portrayal here. Classic film fans, however, can also enjoy the similar I Married A Witch (1942) starring Veronica Lake- both films are often attributed as the inspiration for the beloved television series Bewitched. Modern romantic fans tired of the same inane plots over and over will be charmed, too. Youthful audiences who still enjoy enchanting tales like Bewitched or Hocus Pocus can take in Bell Book and Candle at Halloween, Christmas, or any time of year.

4 thoughts on “FRIGHTENING FLIX BY KBATZ: Bell, Book, and Candle”