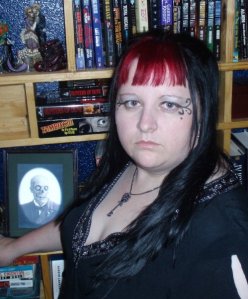 I have a surprise for all you Horror Addicts out there. Our featured author for this episode is none other than our amazing hostess Emerian Rich.

Emerian has been featured on HA before, when the show first got going. “My intention for starting Horror Addicts was to have my short stories mixed in with some stories from friends, but once I started meeting authors who podcasted and wrote horror, I had so many people involved that my work didn’t seem mandatory for the fans to enjoy themselves. I like giving authors an avenue to share their work to fans who will enjoy it and I love to give newbie authors/podcasters a chance to get some exposure. It’s always been my goal to share new and exciting stuff with my readers.”

“Though I do like having authors on the show, it feels good to feature my own work from time to time,” Rich added.

Our lovely hostess will be revealing her new work titled Hammersmith House for HA episode 54: Classic. Here’s a little sneak-peek from Emz, “Hammersmith House is a new piece I haven’t shared or published anywhere. I am in love with it. I hope the listeners enjoy it as well. Hammersmith House is a tale, told in letters, from the time of the 1906 earthquake in San Francisco. It is close to my heart because of my love of the city and because I love to read letters and journals. I have always been interested in the 1906 event. The pictures of devastation and the stories of those who survived effect me as the Titanic does to some people. When I came across a book called A Most Dreadful Earthquake — A First-Hand Account of the 1906 Earthquake and Fire — with Glimpses into the Lives of the Phillips-Jones Letter Writers — by Dorothy Fowler, I was so enthralled with the story of this family that I read the whole book in one night! A few days later, it occurred to me that a horror story set in the midst of this great tragedy must be written. I wanted to make it very time-period and authentic. I also wanted it to be a subtle sort of horror, one they may have read back in those days. This was a big change for me when most of my writing is very graphic and show-all…I also liked exploring a new monster in Hammersmith House. I wonder how many listeners can figure out what sort of classic monster I was portraying in that?”

Horror Addicts, will be familiar with Night’s Knights, which is actually her first “stab at adult fiction.” Emerian shared with me that she “had most of Jespa’s story out before I discovered Anne Rice’s books. She seemed to be able to break open my heart, make it whole again, and change my view on life all in one book. I strive to do that in my own writing. One thing I felt unfinished in my mind after reading her books was the religious cult aspect. She always spoke about vampire cults, but I wanted to know what happened after they kidnapped the vampires. Thus Severina was born and through her I was able to weave a tale of the vampire cult with all their rules, ceremony, and twisted beliefs. Being the child of ministers, I had a lot of knowledge in religion to help me. It wasn’t until I wrote all of the vampires and decided on the plan of creating children that Jespa’s story was added into the mix. Once she was in, there was no way to stop her from taking over the entire book. She’s demanding like that.”

And you will be pleased to know that “[t]he first chapter of Dusk’s Warriors (the sequel to Night’s Knights) should be out in podcast form by the end of January.” She then added that, “I’m a little late on my target date, but I think the fans of the series will be happy with the new story. There are four types of vampires for them to indulge in as well as gods, goddesses, a look inside the vampire investigation headquarters and hell. The theme song music will be provided by Factory of Dreams and I have a full cast helping me out this time including the podcasting voices of: Mark Eller, Mike Bennett, MJ Hahn, Rhonda Carpenter, H. E. Roulo, Arlene Radasky and a few others I’ve yet to confirm. Also some new voices such as: Camellia Rains, the voice of Jez in the Horror Addicts mini-soap GothHaus, and Ariel DaWintre who has done some voice work for Horror Addicts in the past. I’m very excited to get this project off the ground and can’t wait to bring it to the Biters because they have been waiting such a long time.”

ALSO: *Biters should keep posted to Emerian’s personal blog where she is about to announce contest where fans could have their name as a character in Dusk’s Warriors.* 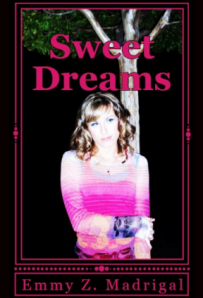 Sweet Dreams just recently became available in print. I was curious to find out how Emerian feels about her novel. “I have mixed feelings about Sweet Dreams. Since I wrote the series in high school, it’s almost like the characters are friends rather than fictional entities. The fact that I podcasted this series still amazes me. I didn’t ever think I would share it with anyone past reading it aloud at slumber parties. But now it has a following that comes close to rivaling my horror fans and I am just stunned with the feedback I’m getting. I think this book fills a void for all of us who once believed (or still do) in the possibility of true love. Even though I now write horror, I still believe in the possibility of a love that will conquer anything life (or unlife) has to throw at you. After all, the undead can still love each other, despite the mucus and dead flesh. Sweet Dreams is a monster of a series. I have three books already podcasted, the first out in print. I have plans for two more at least in podcast format. But I have eight more waiting in the wings.”

Some of you fans may have heard of a little project of Emz’s…a coloring book. “Really, the coloring book is something that was requested by a fan of my art and something that has been on the back burner for quite some time. If you’ve seen my art, you will know that it lends itself to coloring book format wonderfully. I can’t tell you when this project will

be ready, I hope to get a few more prints created before it debuts.”

Now it’s time to get a little more personal with our Horror Hostess. “[M]y life is a never ending rush. As most people know, writers in this day and age can not just write. I have a day job just like everyone else and a five year old autistic boy. So, the main difference is that I am constantly busy. I have little vacation time and every second of my day is planned out. It’s really rather tiring. Perhaps some independently wealthy person can support my dream of writing/creating as a career? Until then, I’m a mad maniac trying to get everything done.”

As the Horror Hostess that she is, I had to ask what actually got Emerian into the horror genre in the first place? “Horror and dark beauty inspire me to create, to live, to be. It sounds like a rather strange thing to say, that things usually involving death or terror inspire you, but I think it is the key to horror culture that outsiders will never really understand. I think it is a true test of the soul when someone is tortured or brought to the brink or death. There is a beauty when a character decides to accept the darkside or when they conquer it through personal strength. I am not a fan of mass murder or child abuse or terrorism in our real lives. However, I am a fan of the child or wife or soldier who battles through and shows that our human spirits can endure pain and still prevail.”

And her favorite horror story growing up? Well surprise for all you fans…Emerian was not a fan of horror as a child! “I wasn’t a horror fan growing up. I was the child of ministers and not allowed to watch many things because of violent or “evil” content. In fact, my favorite Disney animated movie, my husband had to buy me. Sleeping Beauty’s art and style is so amazing. As a child I wanted to watch it, but wasn’t allowed because of the witch in the film. Pretty funny considering now I am the queen of podcast horror, right? What scared me as a child were real things, which is probably why the scariest things to me in film are not vampires and zombies, but child abusers and twisted family situations. I 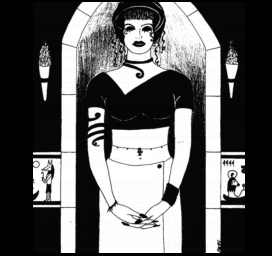 Well fans it’s that time again, be on the look out for Emz’s future projects. “Let’s see… I have the sequel to Night’s Knights, Dusk’s Warriors in podcast production, I am working on the 4th book in the Sweet Dreams Series, Season 5 of Horror Addicts is still in full gear, I want to get my horror/romance Artistic License out to the public in some format, and next? I am writing a modern rewrite of Jane Austen’s Northanger Abbey. I also have a modern rewrite of Sleeping Beauty and a goth girl thriller screen play I’m working on. I’m really tired. Hehhee.”

Emerian had a message for me to pass on to all you readers: “I hope the Horror Addicts enjoy Hammersmith House! They should not be afraid to email me with comments about any of the stories, authors, or bands we have on the show, and if they want to help out, come on aboard. We have tons of stuff to do! And don’t forget to tell all your friends that you listen to HorrorAddicts.net even with our wide audience, you’d be surprised how many horror fans haven’t heard of us!”

For more information on Emerian Rich check out her website:

http://www.emzbox.com – There you can find links to many of her projects

One thought on “13 Questions with Emerian Rich”